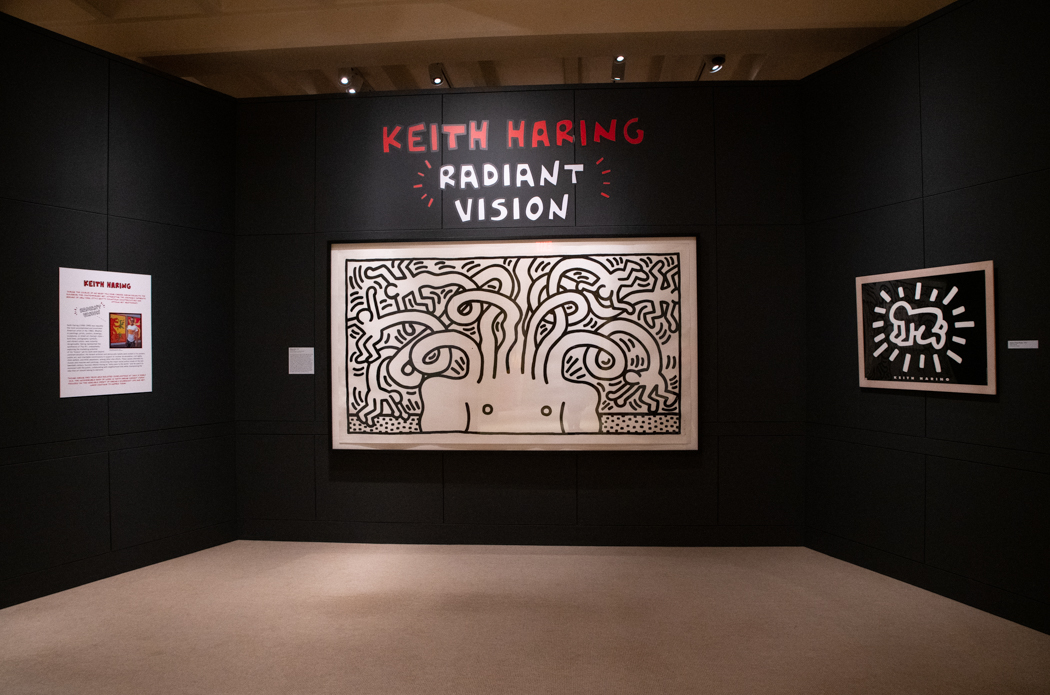 Keith Haring is, and always has been, an icon. There is no other way to describe him. It’s hard for me to think of him at times without getting very emotional about his immense talent and life, and what the world lost when he died of AIDS related complications in 1990. It also particularly hurts because if only he’d lived just a little longer, the treatments and drug cocktails that saved so many people’s lives started to get better and more stable just a few years after he died and he might have survived had he been able to get that treatment.

While I certainly knew what AIDS was as a child in the 1980s, I knew it more as this scary nebulous monster that came to “get” people; I didn’t know that so much of what was actually “getting” people was ignorance from blatant homophobia and racism informing baseless fears and gross government and medical inaction. I was too young to fully understand what was happening during that era, but when I got older, I learned the full story and ever since my heart has remained absolutely broken for every early victim of the AIDS pandemic. So many vibrant souls who might have been saved had the medical establishment and the Reagan government valued their lives and treated them with dignity. If the people in power at the time had taken things even 10% more seriously Keith Haring, and tens of thousands of others who were not celebrities, might still be here today had they gotten the treatment and medical care they so desperately needed and deserved.

While Haring may be gone for over three decades now, he has been a constant presence in pop culture regardless, and to me at least, it feels like he never truly went away. I recognize that may also because I have been deeply connected to the queer world my entire adult life and he remains even more of an icon in that realm, an important would be elder that so many of us still acutely feel the loss of today. Along with his staying power in the queer world, he still is found all over in mainstream culture as well and his style is as fresh and familiar as it was 40 years ago when he was first bursting onto the art scene in New York City. His work still regularly adorns items from t shirts to toys, pillows to Polaroid cameras, and I often see Gen Z aged folks who were born a decade or more after his death wearing shirts and other items with his art.

That being said, I find an odd disconnect sometimes, as many people my age and older recognize Haring’s art but don’t know his name since it’s not a household name these days. And for the young adults a generation or more behind me, they recognize it too but assume it’s just a “brand” (which I suppose it is but certainly not in the 2021 context of a “brand”). The common thread is both these groups often can’t connect the art and the name when I mention Keith Haring without one of his works visible. I always respond to this with “no you KNOW him, trust me” and then Google something for them to look at. I just said this very thing to my brother when I mentioned I would be traveling to see this show with our mom; He didn’t recognize the name but he immediately recognized the work and smiled when I showed him a picture- that is the staying power Haring’s art has had on people’s psyches, you see it and just KNOW. 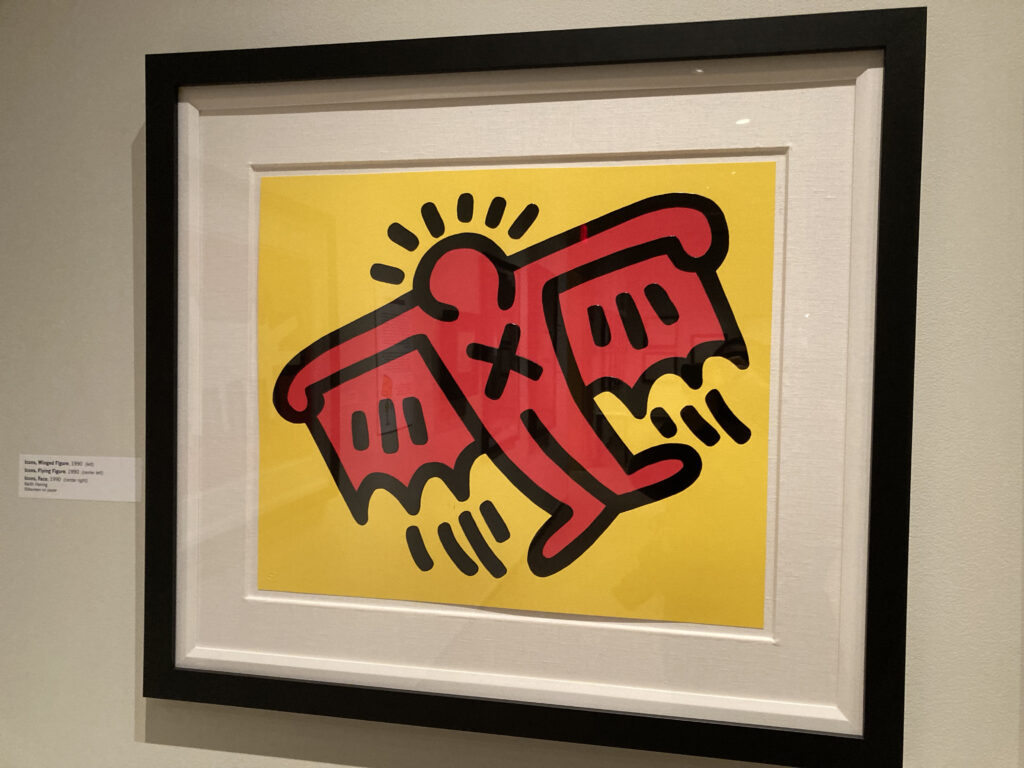 The whole point of this exhibit is to address this disconnect and introduce and familiarize a new generation with his work, or in the case of middle aged guys like my brother, to reacquaint them. As per the museum’s website:  Fenimore Art Museum celebrates both the icon and his iconography in Keith Haring: Radiant Vision, a premier exhibition that introduces a new generation to Haring. Featuring an extensive collection of lithographs, silkscreens, drawings on paper, and posters, the exhibition describes the full arc of Haring’s short but prolific career. Visitors will instantly recognize seminal images like “Radiant Baby”—images that permeated American culture in the 1980s, became emblematic of the time, and are powerful examples of how Haring fought for change, using art as a platform for activism.  The exhibition features over 100 works from a private collection working in tandem with the Fenimore as a tribute to this iconic artist and his dedication to social justice and the betterment of youth worldwide.

The exhibit was a mixture of work he personally created, as well as some silk screen prints that were dated 1990 and 1993 which while it was not made clear, I assumed were made by authorized printers instead of by Haring himself. This obviously was the case for the prints dated to 1993 but I also assume that the 1990 prints were also created in this manner as he died in February of 1990 and was in the hospital for the final weeks of his life. I was also very excited to see some of his pencil drawings and particularly one his very early subway chalk drawings which date to the early 1980s; I had never seen any of these in person before. A few of the commercial advertising pieces he did I had never seen either, such as his collaboration with Richard Avedon featuring Brooke Shields. Of course it was also a delight to see large silk screened prints of the Radiant Baby and Three Eyed Smiling Face, even if they were likely not personally printed by Haring, they are still impressive to see up close. Those images are among his very best known, iconic images of the 1980s which are such a clear memories from my childhood; I really can’t remember a time in my life when I was not conscious of them.

As mentioned, I do get very emotional at times when thinking about Keith Haring- his beautiful life and his tragic early death- and I did get a little overcome when first sitting down to type this up. But I found that when I was in the room with his work, I felt no sadness at all. Being amongst his work and his energy- because I did feel it there- I felt nothing buy joy and happiness which perhaps is the greatest gift he gave to the world, not just his art, but the joy that came with it. The staying power he has had is incredible and I hope many more generations continue to see his work and know more about his remarkable life and career. His light will always live on and radiate into the ether as long as new generations experience all he had to offer. 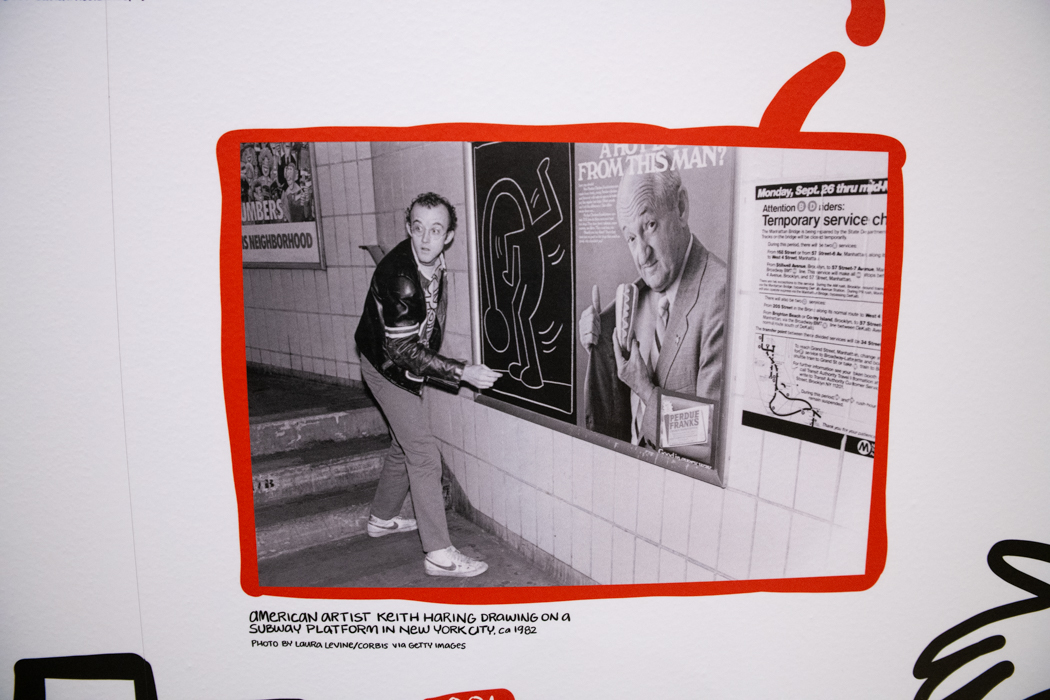 Keith Haring’s official website features hundreds of images of his work sorted by year from 1979-1990, as well as extensive biographical and exhibit information and Haring in his own words.

Keith Haring: Radiant Vision will be on display at Fenimore Art Museum until October 11, 2021.

Scroll down to see photos from the exhibit (all artwork copyright The Keith Haring Foundation; included photographic images copyright the individual photographers; photos of this exhibit by Kate Hoos). 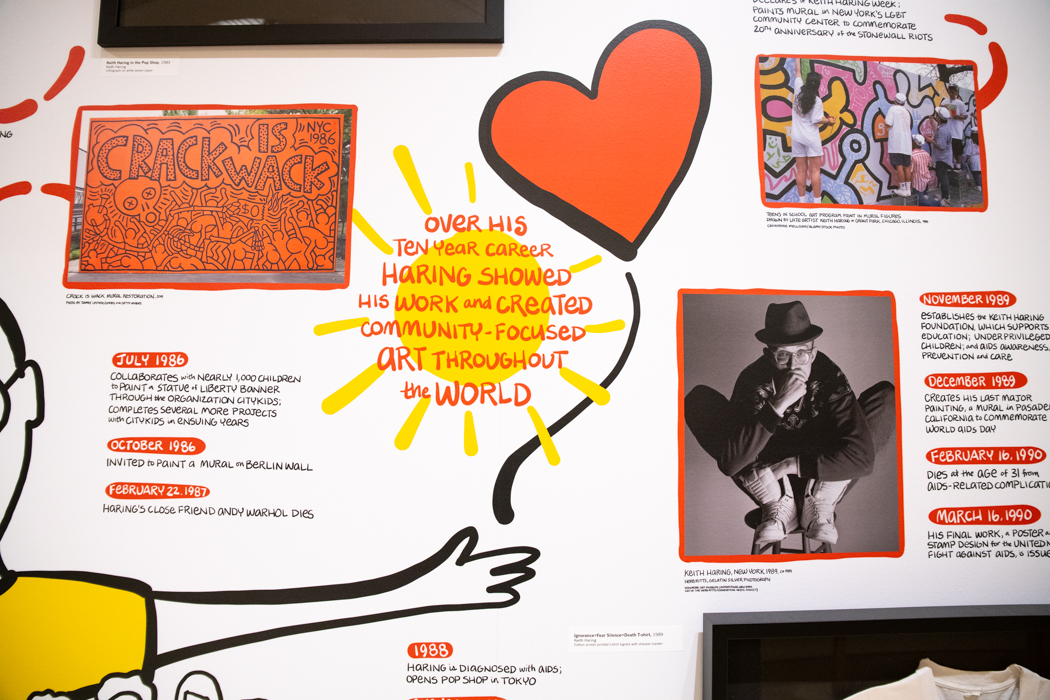 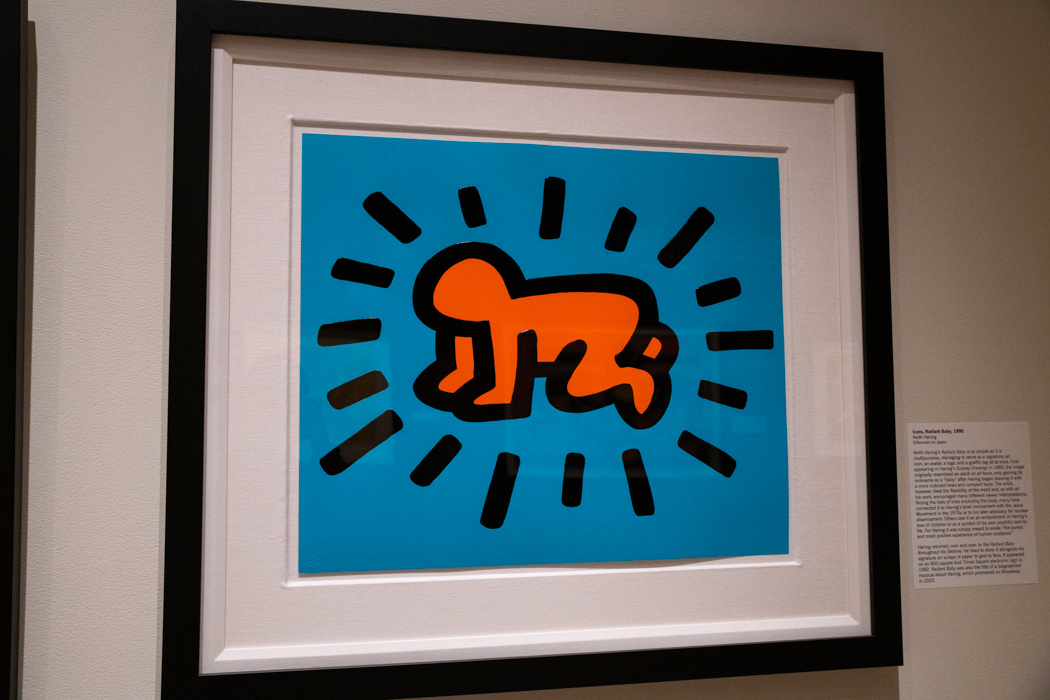 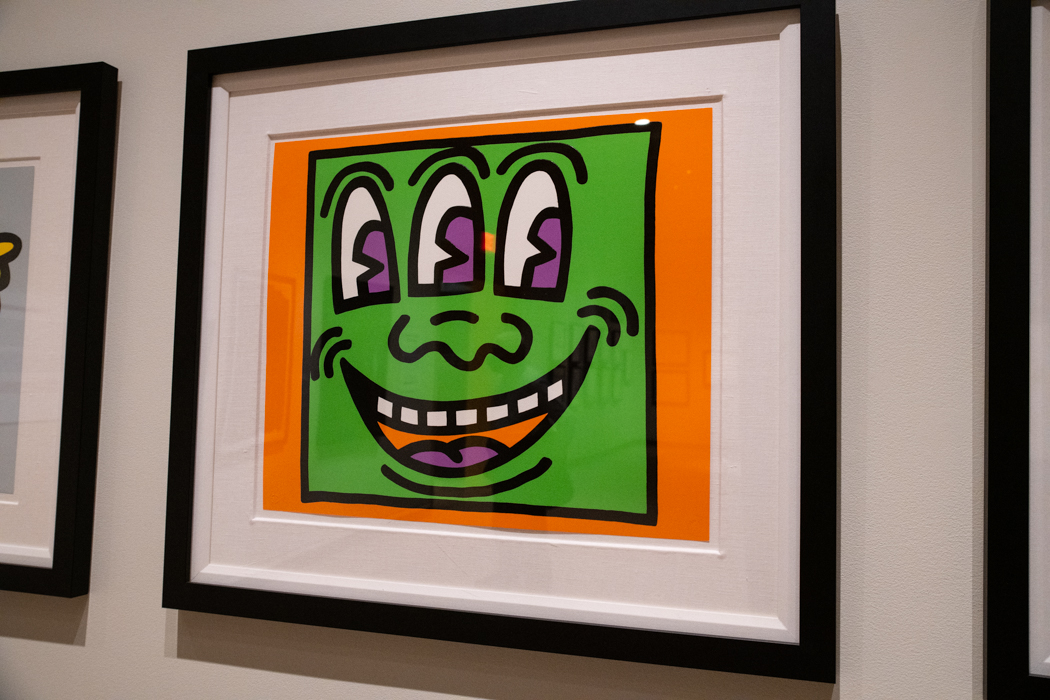 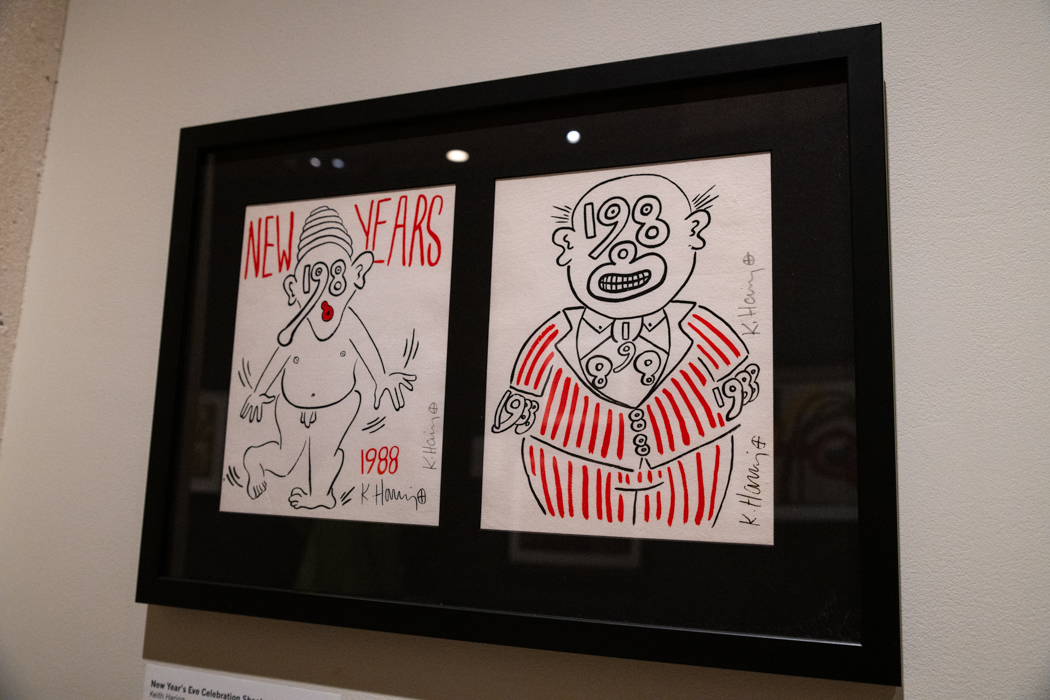 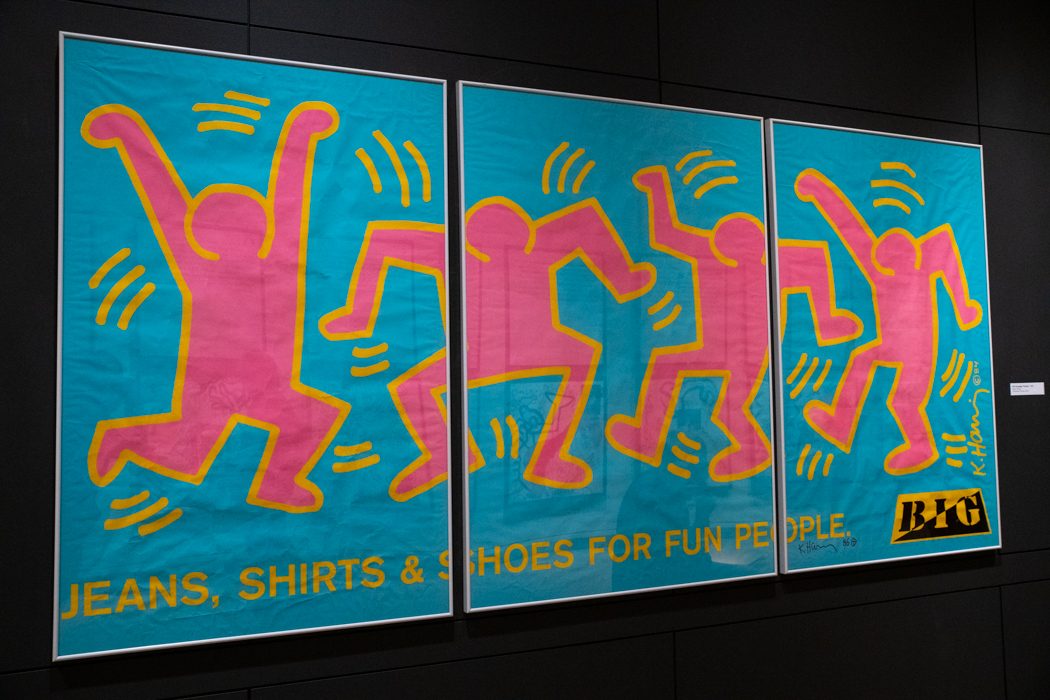 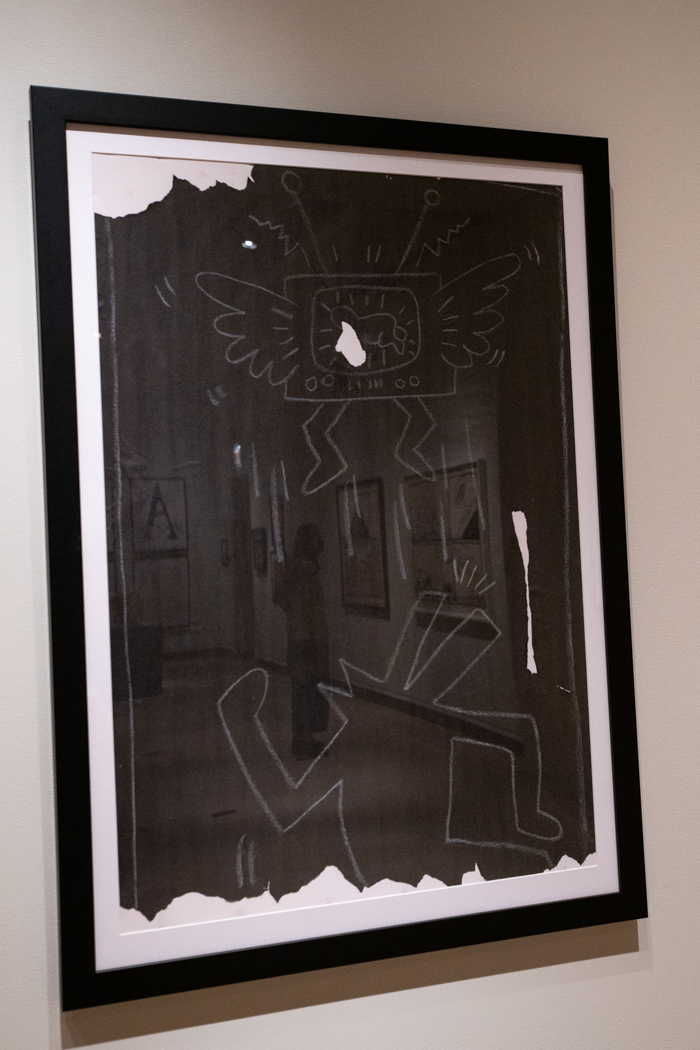 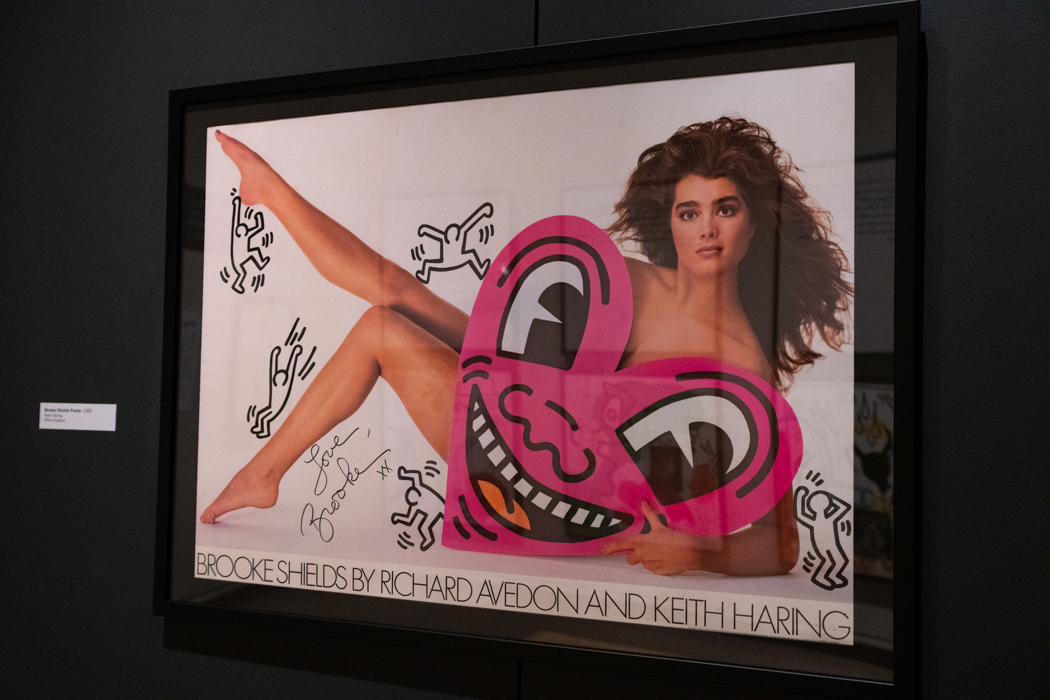 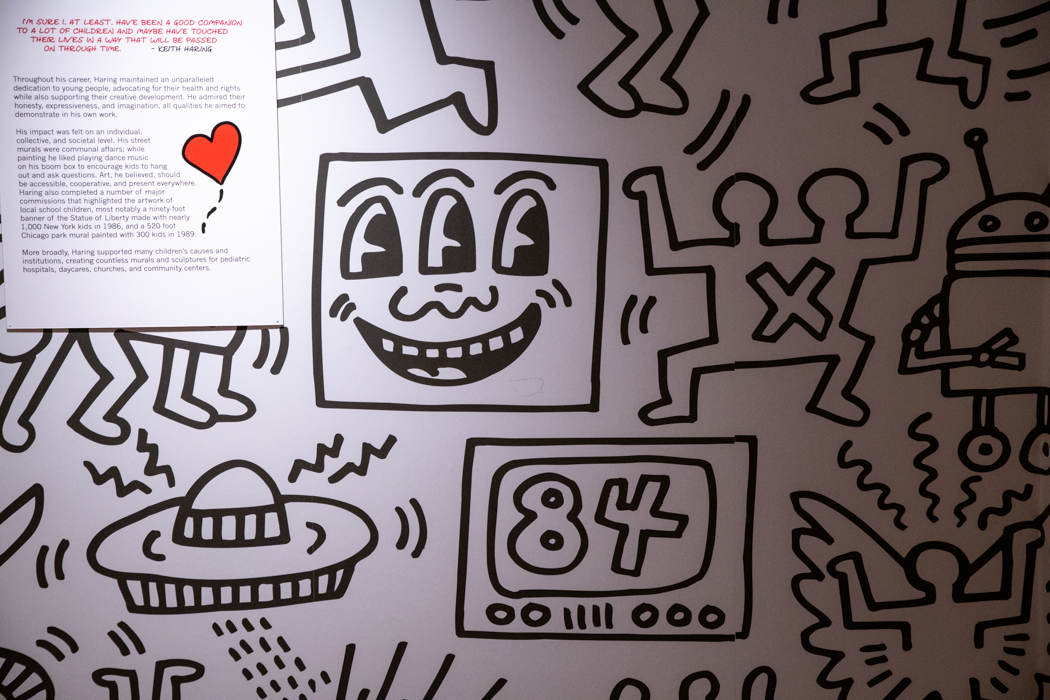 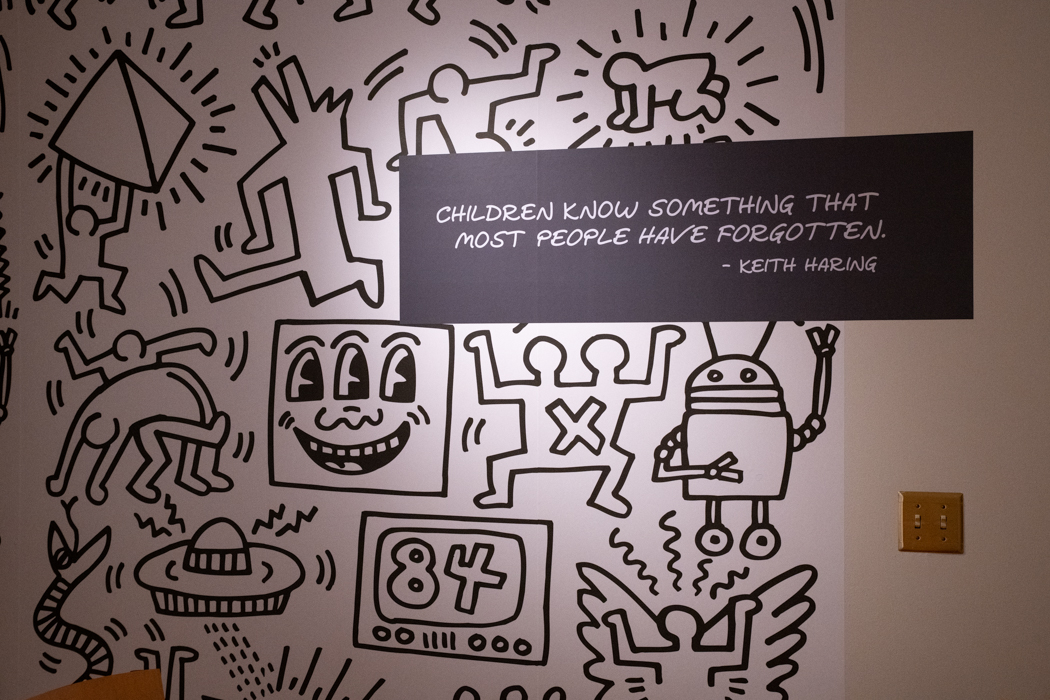 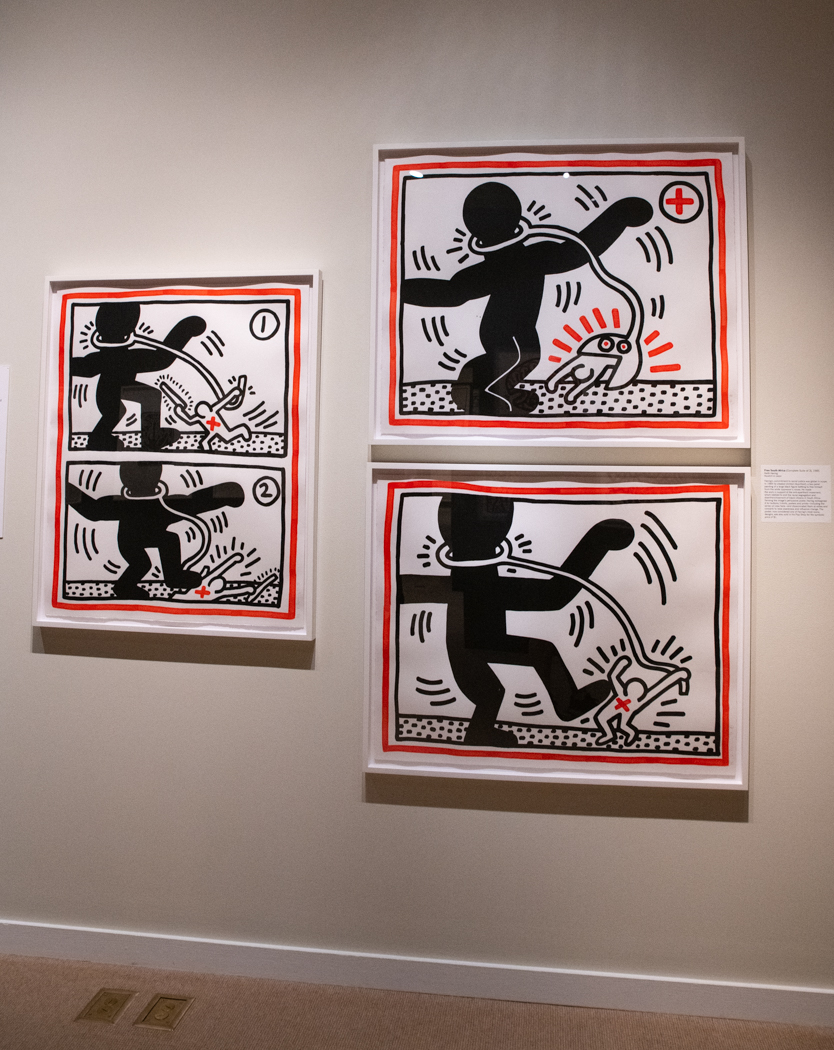 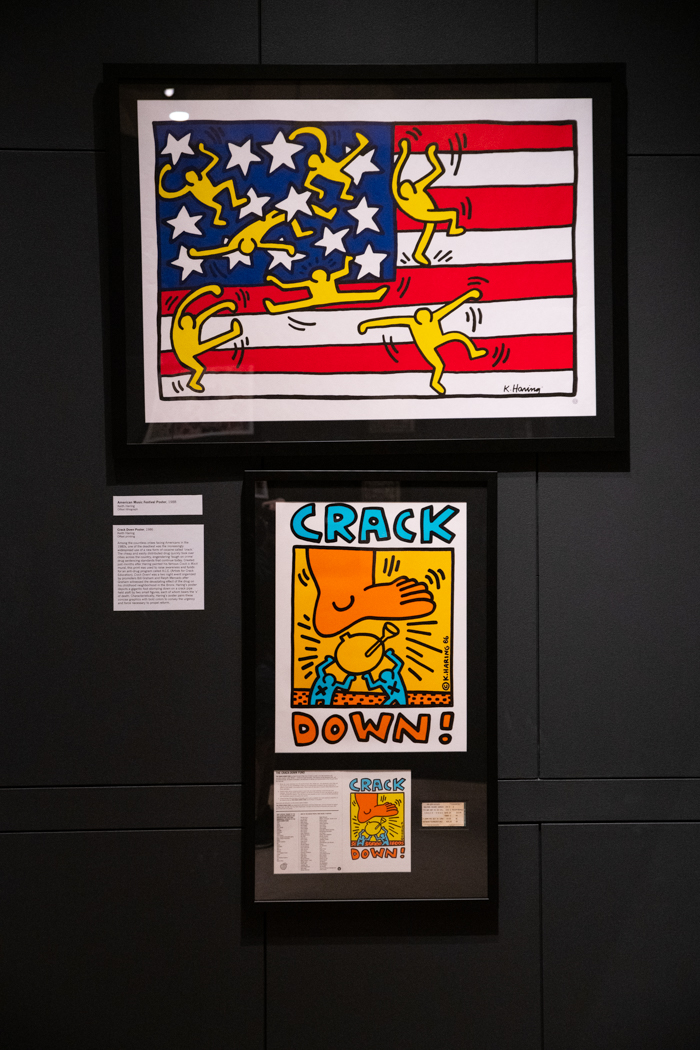 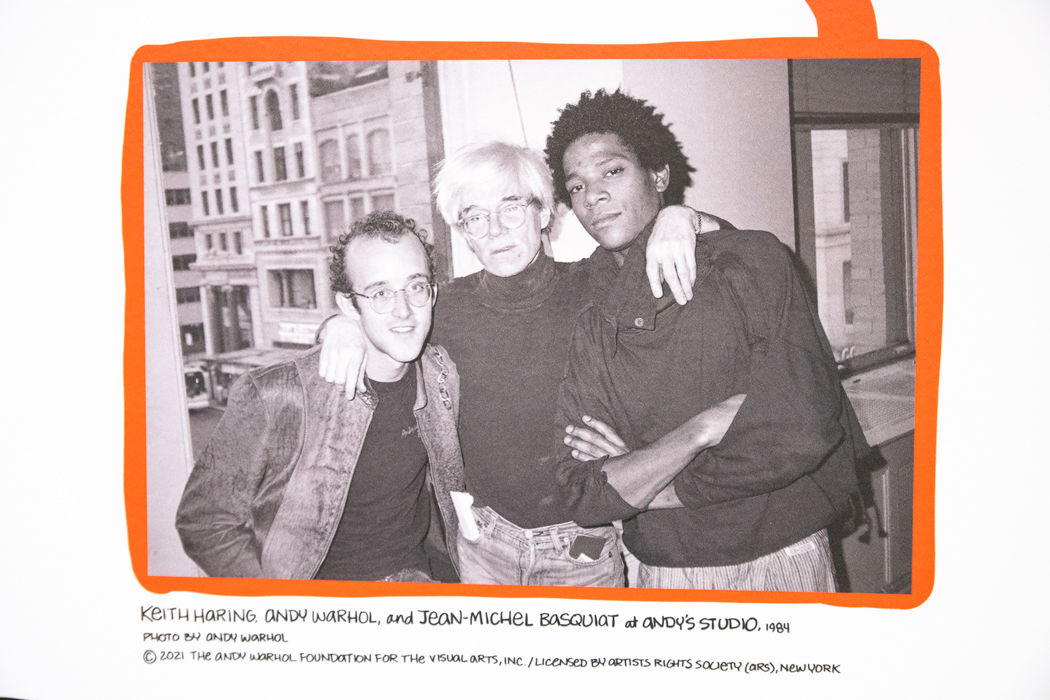 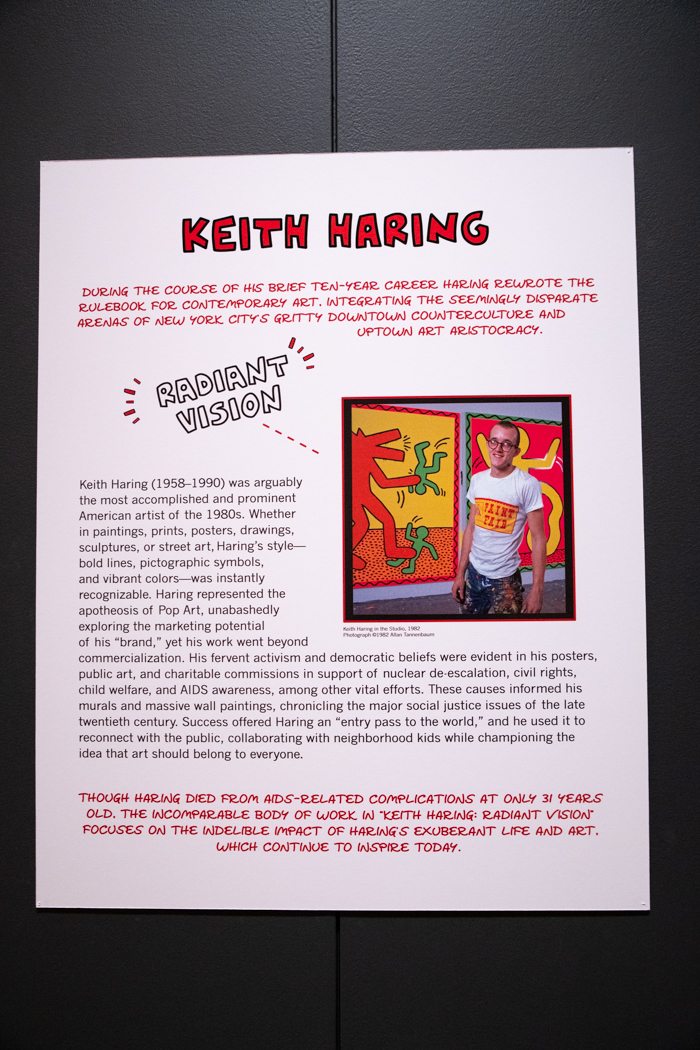 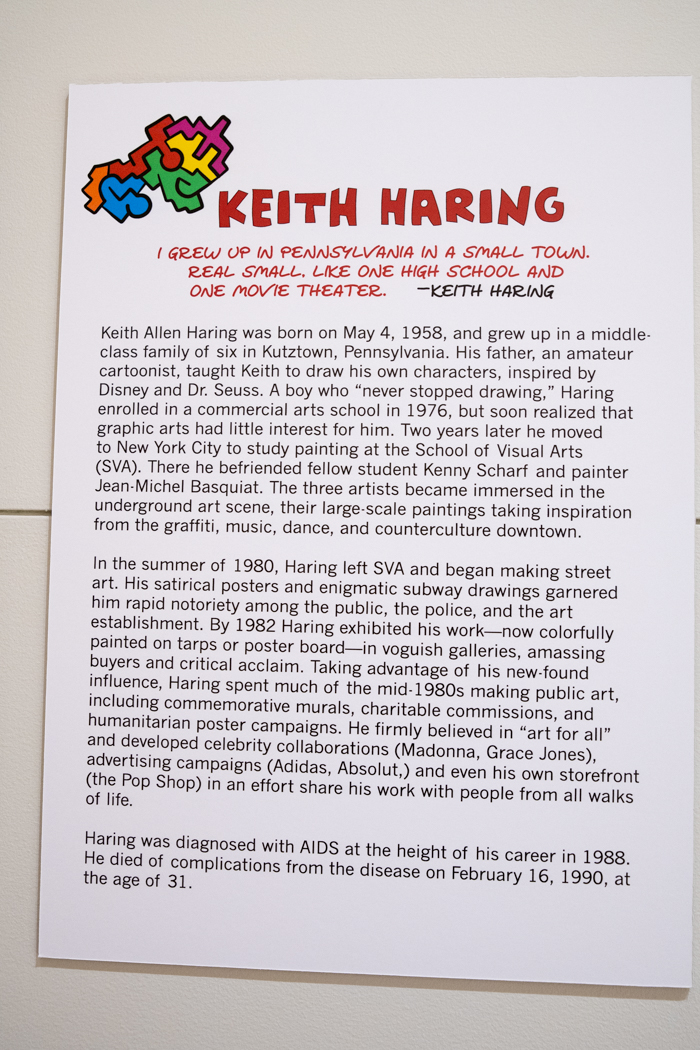