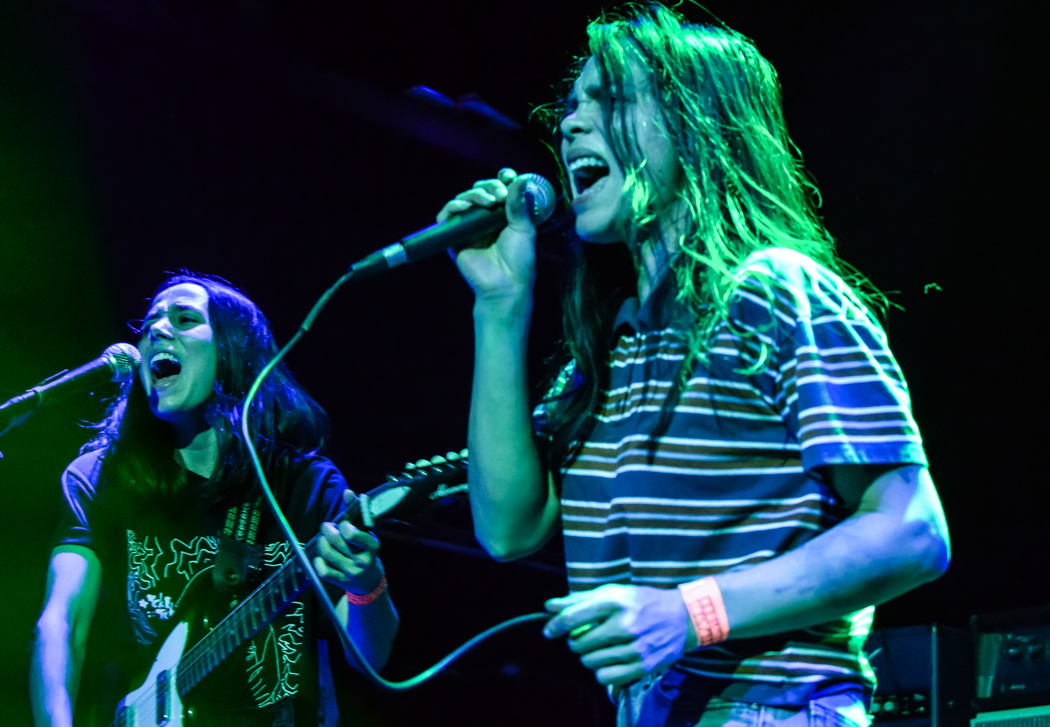 It’s never easy for a relatively unknown band to play the role of opener. It’s even harder when that band is composed of four young women. Because sure the rock touring scene has gotten better for women, but nonetheless it’s still very much a man’s world out there in a lot of ways and unfortunately women still don’t always get the respect men are automatically given. Things get even tougher when you’re playing sold out shows at iconic venues filled with rabid fans of the headliner who for the most part have one and only one thing on their minds…to rock out to that very same headliner. This is exactly what NOBRO was up against on Friday night at Manhattan’s fabled Bowery Ballroom as the opening act for Tokyo Police Club.

Hanging out in front of the stage prior to the show, it was pretty clear that not too many were familiar with NOBRO. The crowd was clearly there to see Tokyo Police Club, which is all well and good. I, for one, first heard of NOBRO via one of my favorite bands PUP and was there to see them. They had toured both band’s native Canada together in 2019 which brought them to my attention. Unfortunately they haven’t been able to tour the States since this discovery due to you know what. (NOTE- This wasn’t their first time playing NY, as they did open for FIDLAR at Terminal 5 back in September of 2018.)

The four band members hit the stage running shortly after 9 PM with “Better Each Day” which they released as a single last month. Starting the song off with an acapella gospel chorus intro, the song then takes a sharp turn and churns into an anthemic rocker reminiscent of the cheesy Six Flags Amusement Park theme song (you know the one with the creepy bald guy dancing around like a fool). But there is nothing cheesy about “Better Each Day.”  From the moment that drummer Sarah Dion kicks into the rollicking meat of the song, it is clear that NOBRO has come to play and when I say play, I mean play hard. Next up was “The Kids Are Back,” which starts out with Dion once again pounding on her drums as a back beat to some nasty guitar riffing from Karolane Carbanneau which is right out of the Deep Purple songbook ala “Woman From Tokyo”.

From here the songs came shooting out rapid fire with lead vocalist and bassist Kathryn McCaughey shouting and screaming and singing at a pace that would make the Ramones blush. I mean they were having a blast! The energy was about as high as I’ve seen from any band I’ve seen in quite some time. During quarantine they released an EP, Sick Hustle, which they ended up playing in its entirety. 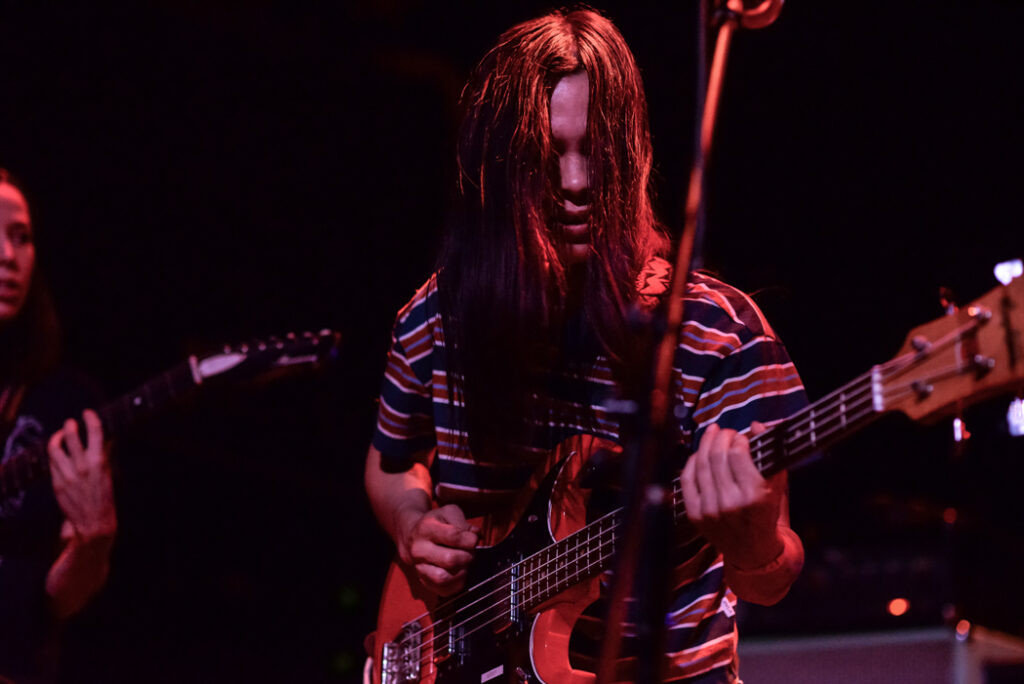 While the band claims to have been influenced by the likes of Jay Reatard, Black Sabbath and Iron Maiden amongst others, live on stage I couldn’t help but be reminded of current band Bat Fangs (see pics of their recent Union Pool show) and of course The Donnas from the 90’s. The parallel between these groups is quite self evident…young women determined to take the male dominated rock and roll world by storm. Taking the cock rock metal of the late 70s and early 80s from bands like Uriah Heep, Deep Purple and Black Sabbath mixing in the fast and furious rhythms of The Ramones and then adding the snarl and feminine angst from the Riot Grrrl movement.

The show was a non-stop tsunami of pounding and ferociously fast drumming from Dion and a mix of power chords and lightning quick metal guitar riffs from Carbanneau. But then there was lead singer, McCaughey with her fingers flying up and down on her bass fretboard all the while screaming lyrics into her mic, her long hair flying all over as she flailed about the stage. Lastly, I would be most remiss if I didn’t also pay homage to keyboardist and percussionist Lisandre Bourdages. Off to the right of the stage, she at first appears to be the reserved member of the group until she starts pounding on her bongos and it quickly becomes apparent that there is nothing reserved about her whatsoever.

They closed out their set with a scorching version of “Don’t Die” from the aforementioned Sick Hustle EP followed by “LA LA” another single from 2019.  Surprisingly, they came out for an encore which is something openers almost never get to do. They finished off their evening with a crazed cover of MC5’s “Kick Out The Jams” which saw each of the musicians pick it up to ELEVEN, complete with McCaughey writhing and contorting while playing bass flat on her back on the floor.

To sum it all up, NOBRO converted a room full of Tokyo Police fans into NOBRO enthusiasts. Upon conclusion you could see throughout the room that “OH FUCK” look on everyone’s faces. That look of “did that really just happen?”  Afterwards, on my way home, I tried to come up with something which would aptly describe NOBRO’s show.  Some way of putting their sound and fury and tenacity into words on a piece of paper. The best I could come up with was, if one were  to mix a can of Red Bull with 2 shots of Fire Ball and that combo made a sound, that sound would be NOBRO. 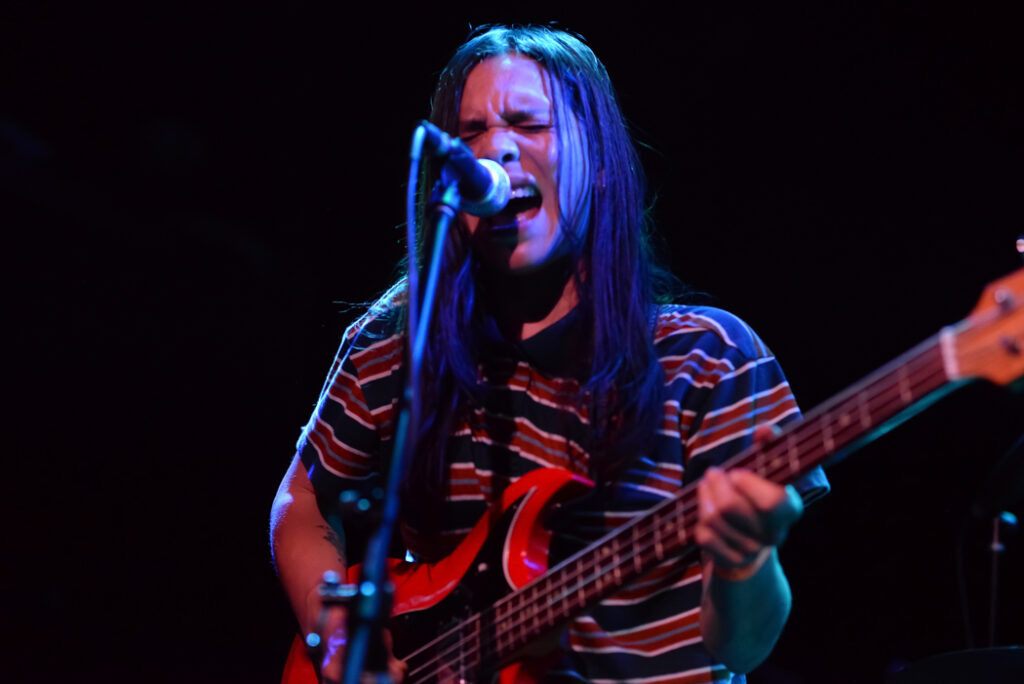 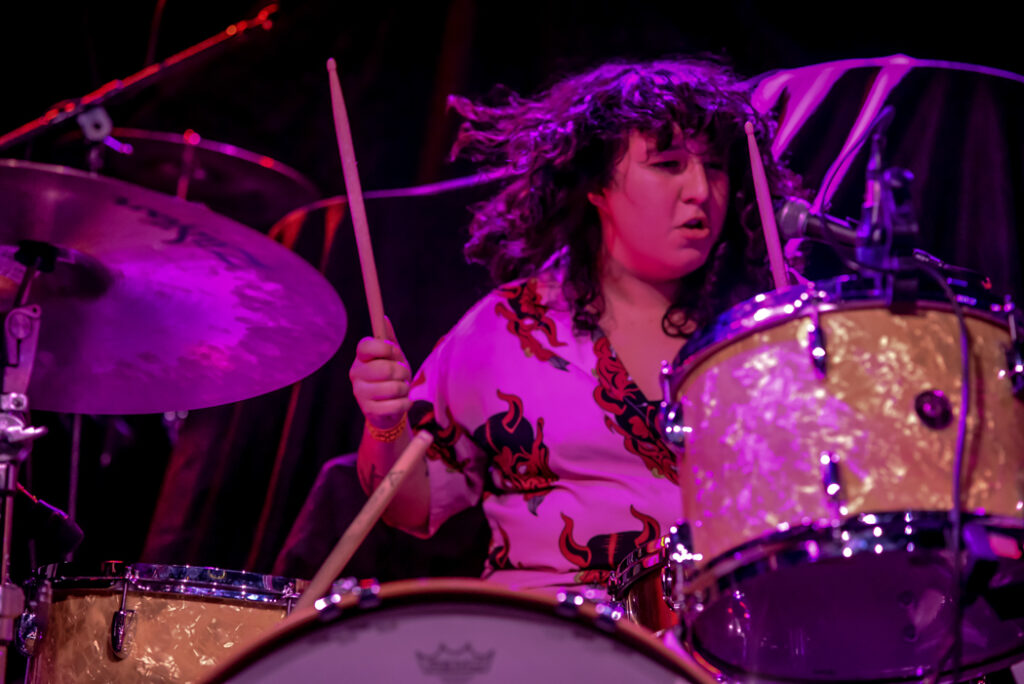 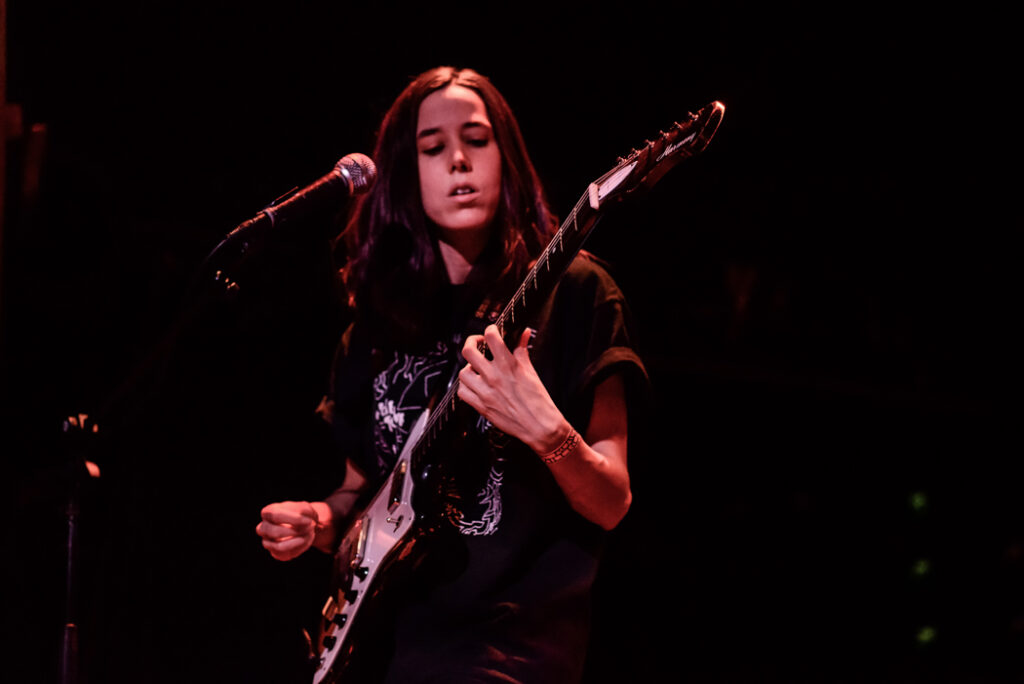 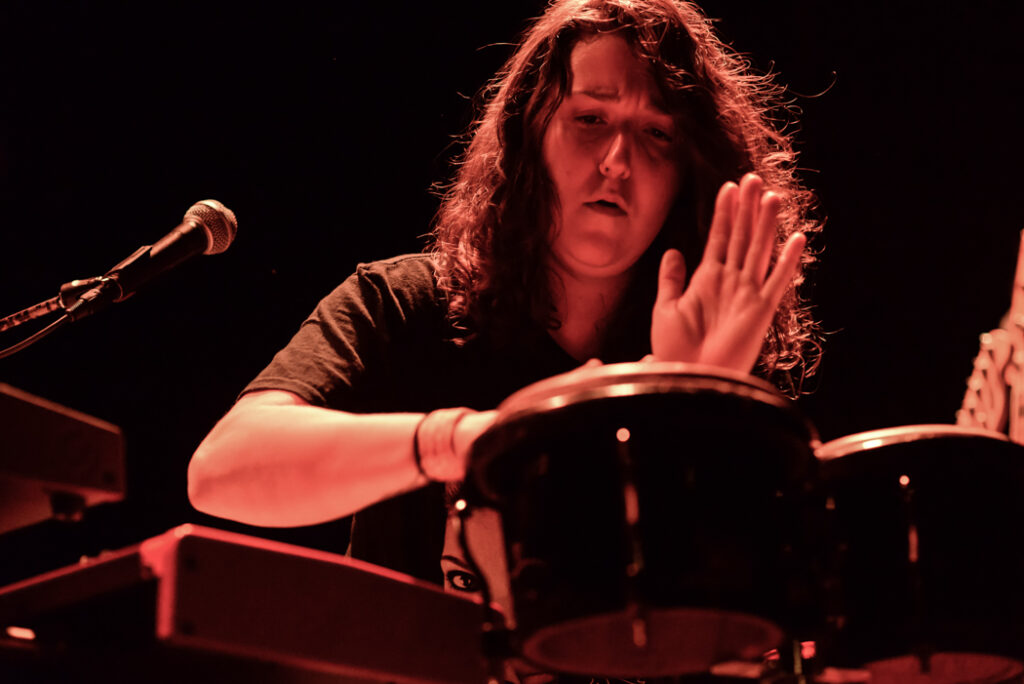 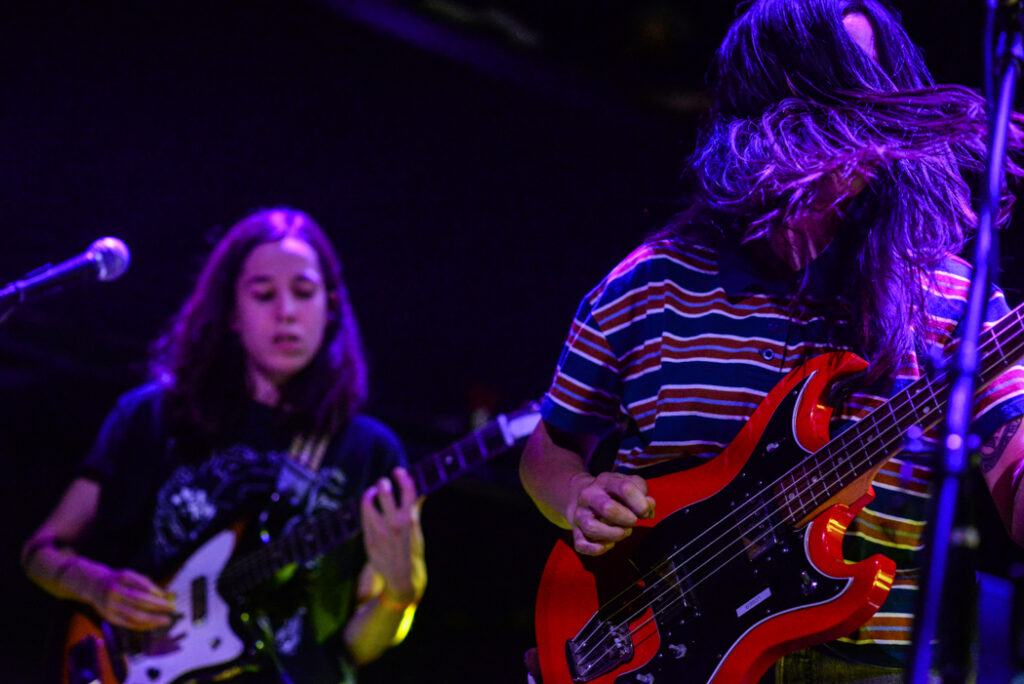 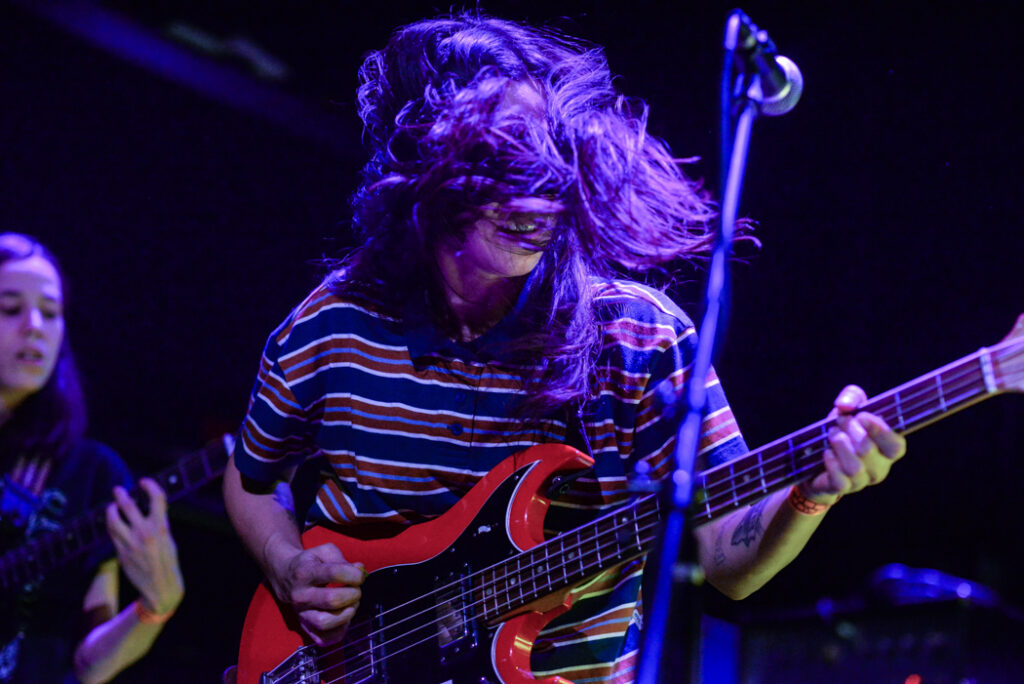 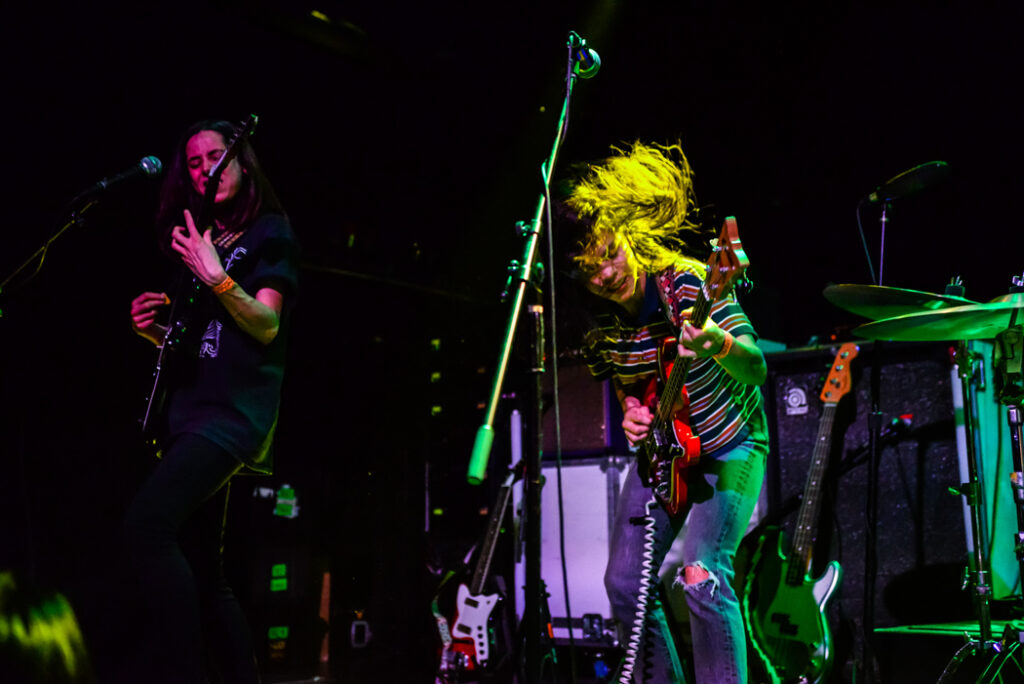 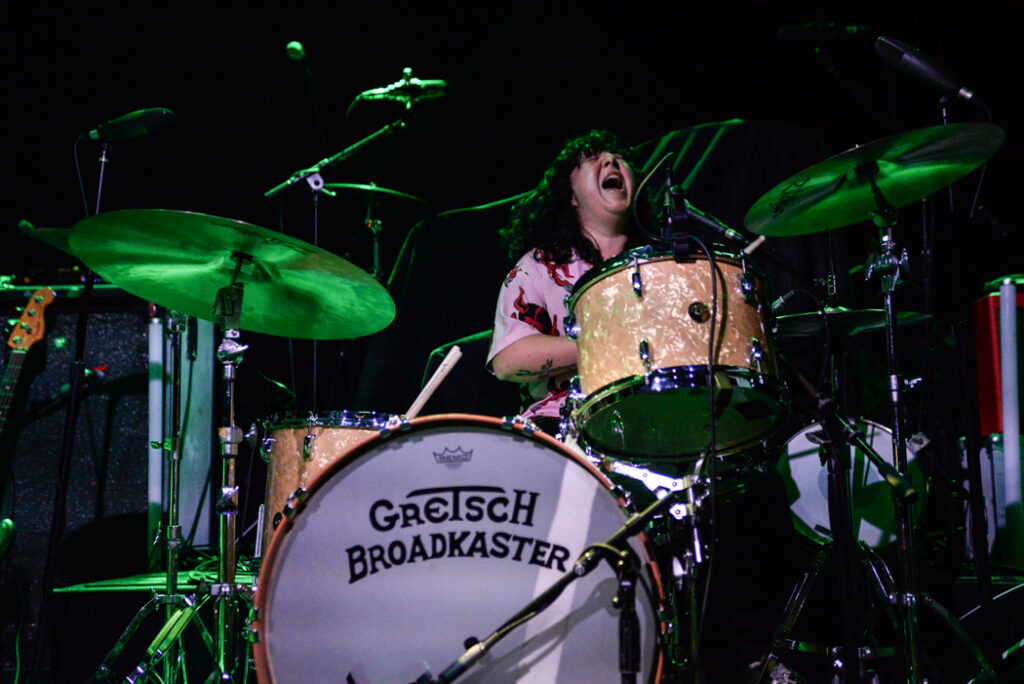 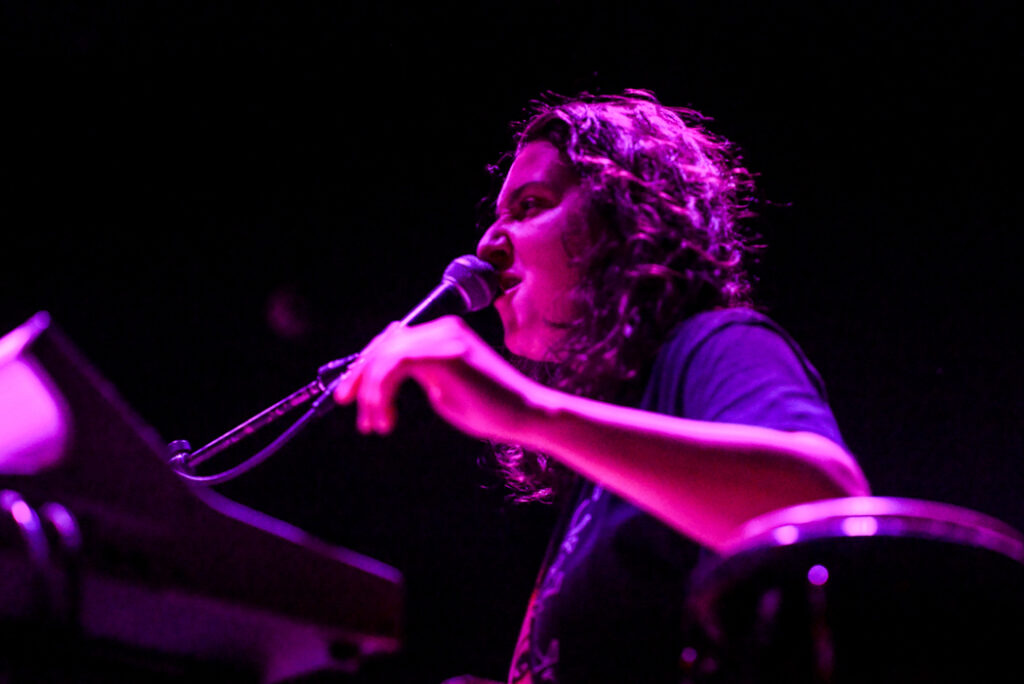 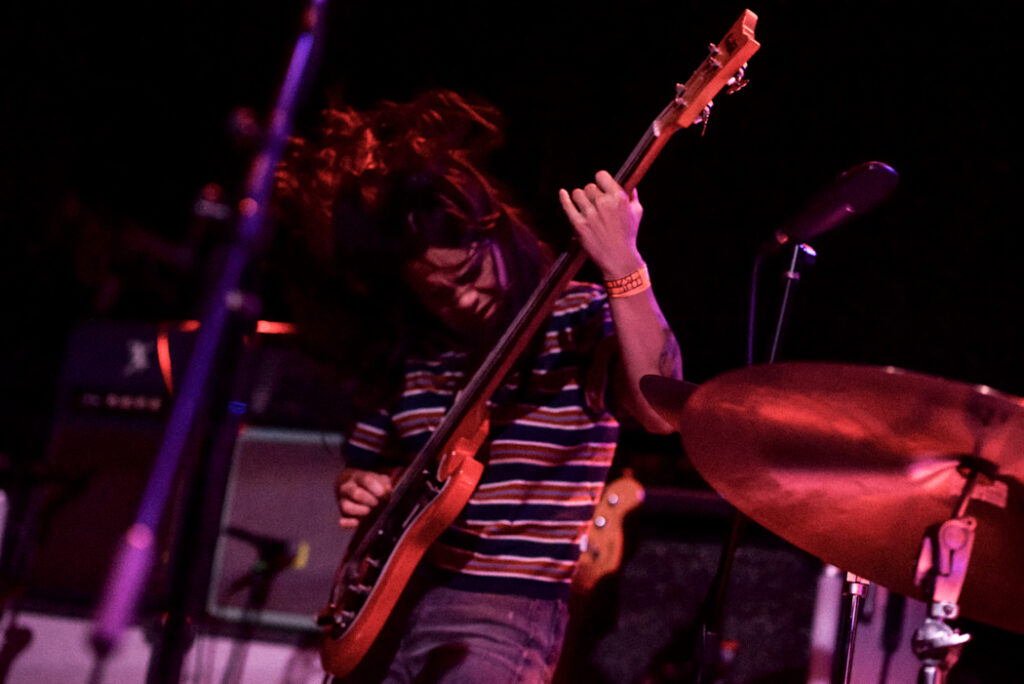 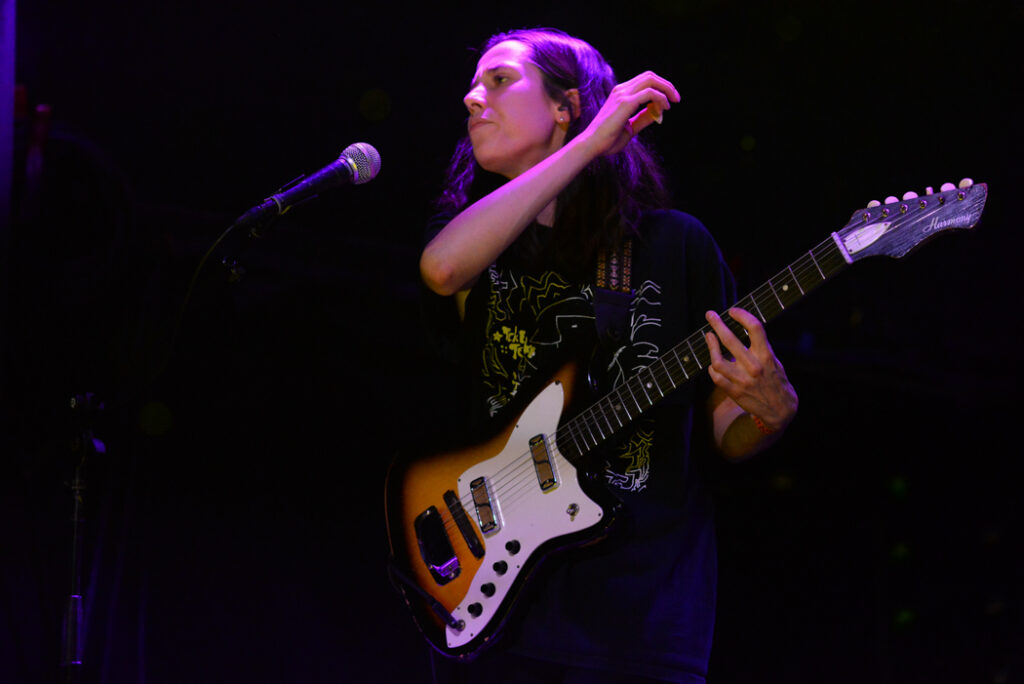 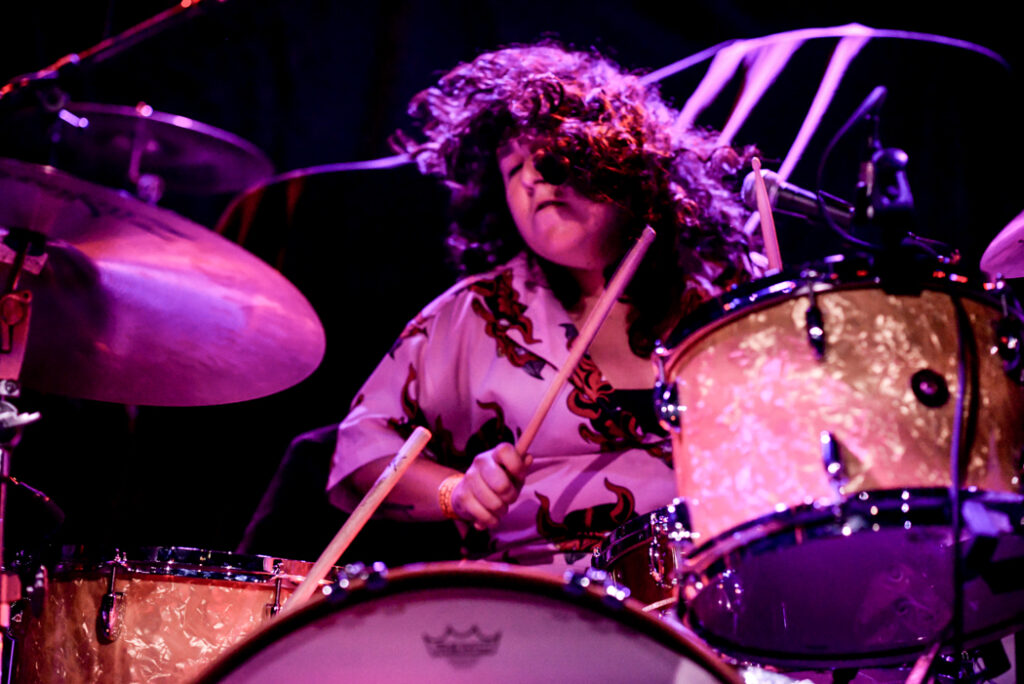 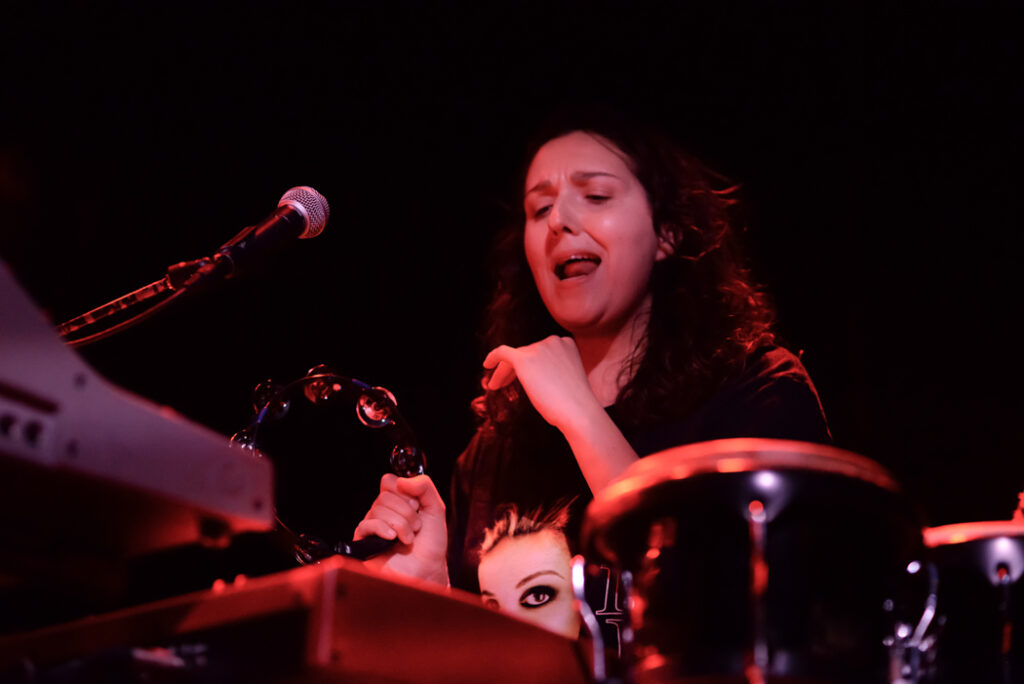 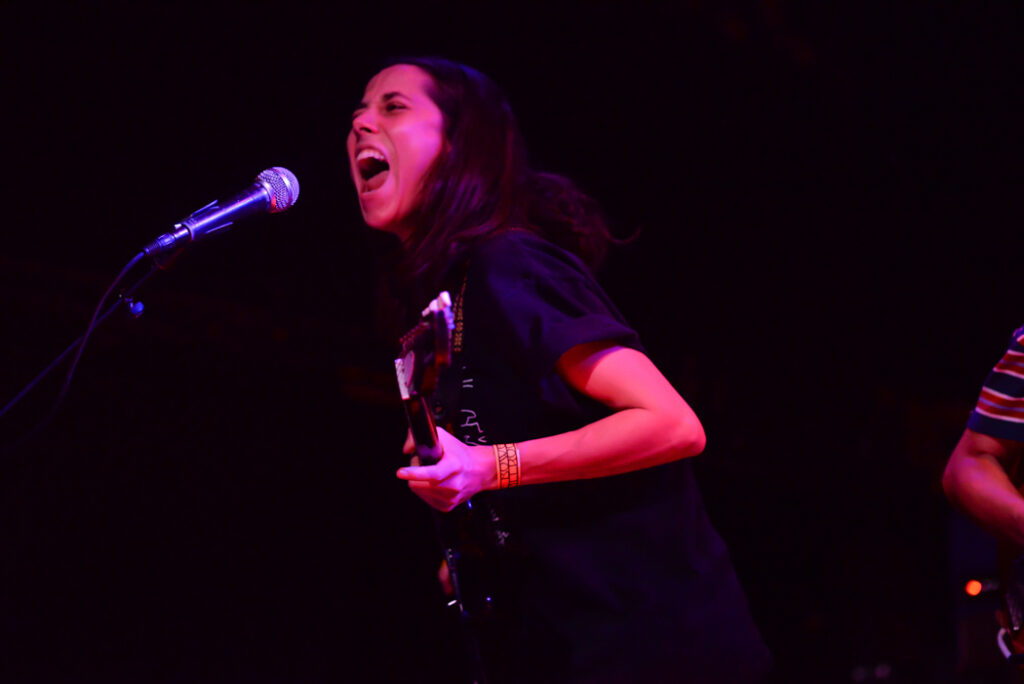 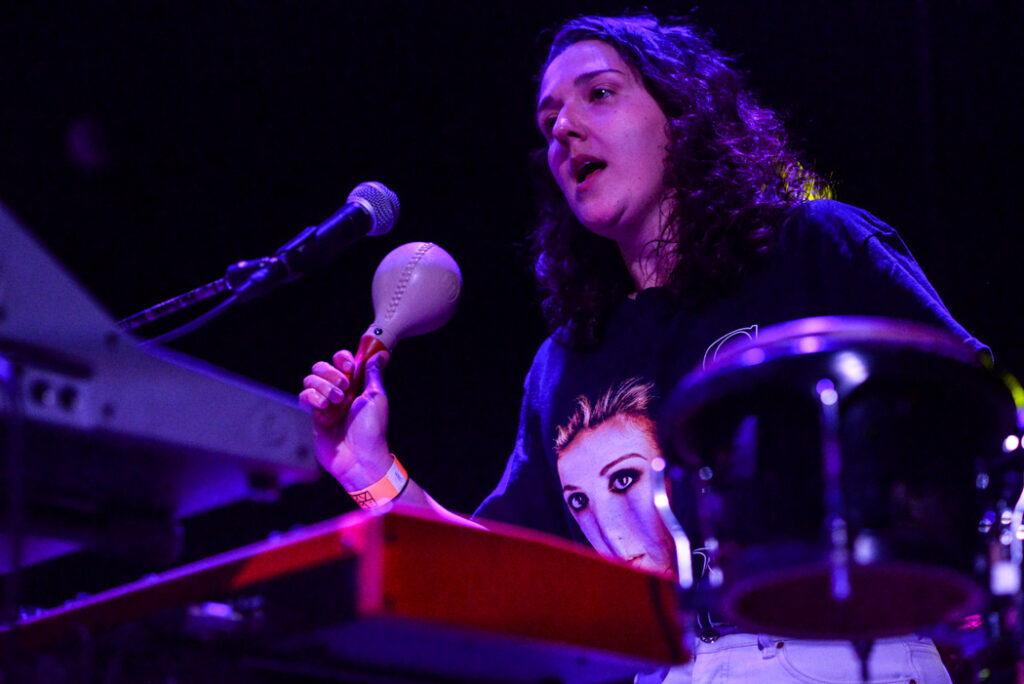 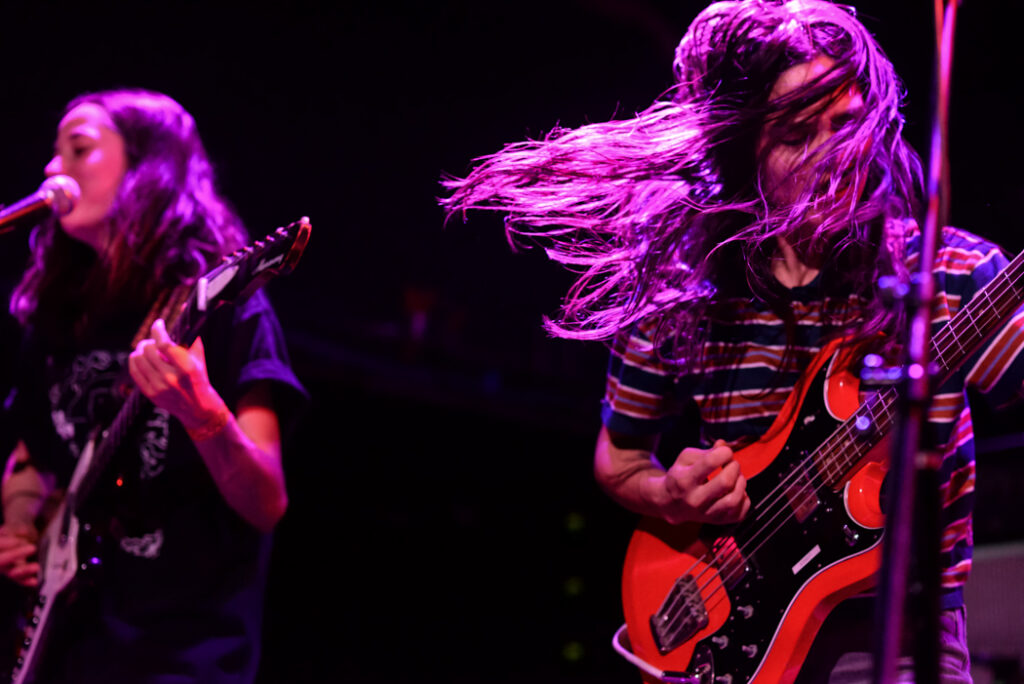 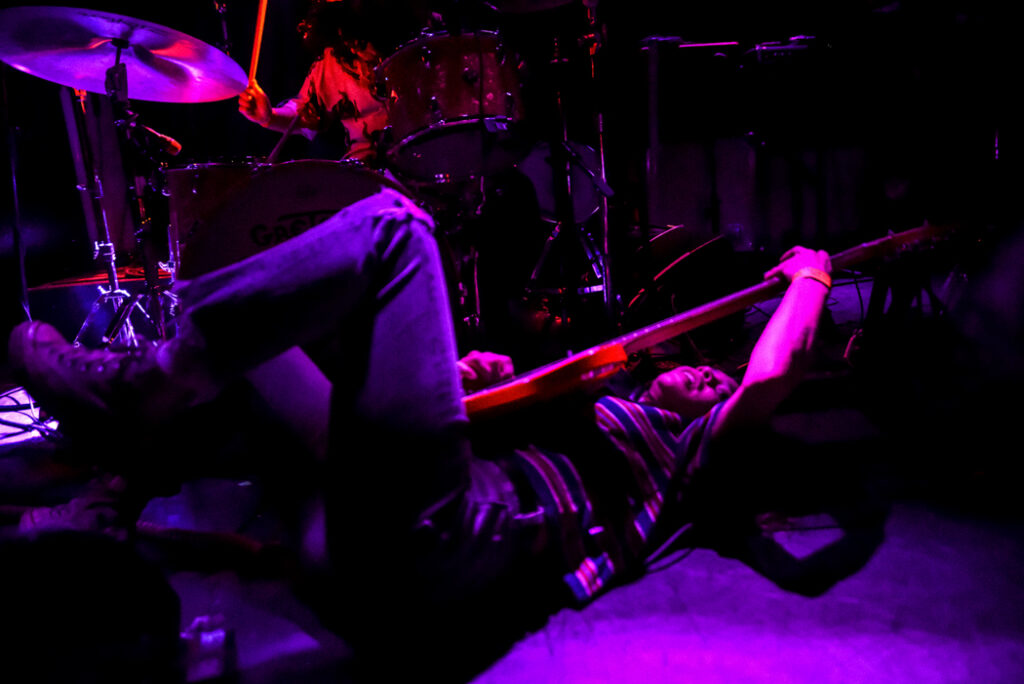