NWoBHM and Beyond, The 80s Metal Explosion 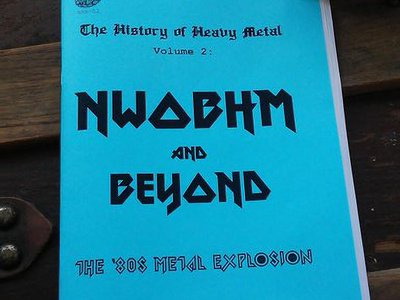 One of my favorite Bandcamp finds last year wasn’t music, but a delve into one of the greatest musical genres of all. A History of Heavy Metal is a self-published zine series by B.A. Ricciardi, who goes by “Badger” around these parts. It was a serendipitous discovery; since I started here at FTA, I’ve been thinking a lot about music writing. Describing music is always a tightrope between a press-release or an op-ed, and that goes double for longform. In an overview like this, what separates compelling history from simple, encyclopedic entries, or an overly personal list?

Badger seems to have found the perfect formula, melding necessary information with heartfelt musing about what makes metal so fucking good. The recently-released second volume, NWoBHM and Beyond: The 80’s Metal Explosion, tackles the coalescing of metal into something more definable than the often-scattered hard rock of the 70’s. (For the uninitiated, NWoBHM stands for ‘New Wave of British Heavy Metal’, and includes such bands as Iron Maiden, Venom, and Saxon.) All the greats are here, but the reach is far wider than Britain in scope, and many other artists are brought out into the light (including some lesser known female-fronted acts of the era, as well as bands from Japan and South Korea.)

The format of both volumes so far is a short introductory piece  — which here includes an aside on the polarizing and impossible to ignore phenomenon of 80’s hair metal — followed by a walk through the music itself. Bands get an introductory blurb (length depending on how high their influence looms) after which a selection of tracks are given their due. The focus on songs rather than albums as a monolithic whole is really a boon to those descending into unfamiliar territory, especially in this day and age of streaming. That’s not to say the impact of historic albums is neglected, just that acts such as Mythra (1*) and Trespass, who never released a full LP, are given a fair shake, and bands with a larger output don’t take up so much space we tire of them.

NWoBHM is not my bread and butter, so unlike the first volume, where I knew (nearly) every act, this volume brought me a number of new entries for my playlist. And of course, choice is a form of editorializing. But I maintain that any good overview of a genre like this can and should never be complete, and will immediately invite the reader to shout into the void about what was left out, because otherwise what you have is an anodyne encyclopedia. As Badger wisely states, “I always make an attempt to be fair, but I never make an attempt to be neutral.” Why write about music on anything but a wiki if you don’t want to include your own opinion? And so I find myself shaking my head that Sabbrabells aren’t here with the other Japanese metal bands, and vowing to fight Badger in a Denny’s parking lot over Motley Crue. (Too Fast For Love is a masterpiece. 2*) And honestly, that’s a plus in my book, as “this is still a History of Heavy Metal, and not a list of every good metal song that ever came out.”

The writing doesn’t shy away from technicalities when necessary (I’m sure some people will have to look up ‘ostinato’) but it’s couched in fairly colloquial speech, so it never feels like reading a textbook; rather, it’s almost as if Badger himself is right there, extolling the virtues of metal with a gleam in his eye. Like a lot of great metal music, NWoBHM and Beyond mostly takes itself seriously, but knows when to poke fun at itself and when to just have fun. From waxing poetic on Dio’s relative lack of poetry, to an extended paean to X-Japan’s “Art of Life,” the text is both straightforward and intricate, like the best metal songs: riffs and elaboration.

NWoBHM and Beyond: The 80’s Metal Explosion is available in A5 zine format, at 64 pages long. Both volumes of A History of Heavy Metal can be found at Heavy Metal Handbook on Bandcamp, with volumes three and four, on thrash and death metal, respectively, to be released in the future.

2. Note I’m not claiming this is heavy metal, just that it’s good