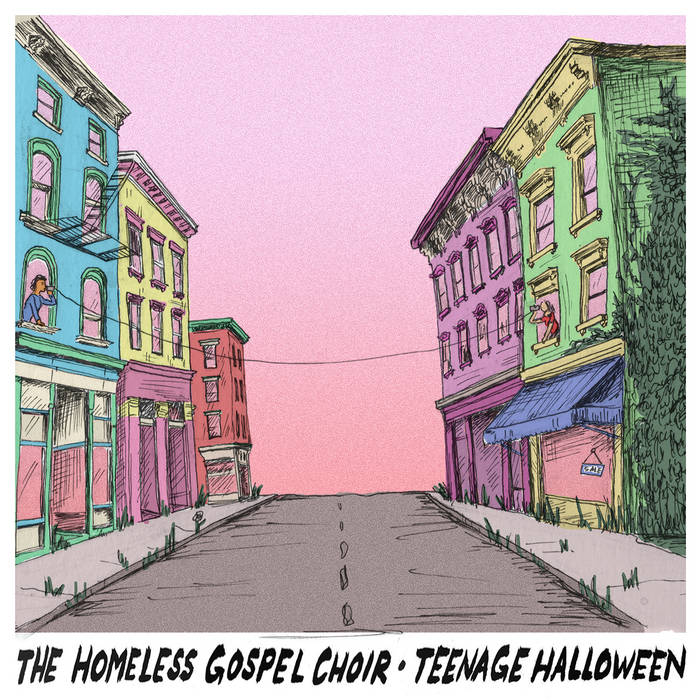 What a pleasant surprise to wake up on New Year’s Day only to discover that The Homeless Gospel Choir and Teenage Halloween had released a new split of two new songs each on Don Giovani Records. I say, “pleasant surprise,” but quite honestly anyone who’d actually been paying attention to their socials shouldn’t have been surprised at all since both bands had either hinted or flat out stated that there would be something new out on the first.

The Homeless Gospel Choir’s pair of songs, “Harrisburg Shoes” and “Pittsburgh Shoes,” seem to me to be Derek Zanetti’s obvious nod to their moving to Harrisburg from their lifelong home of Pittsburgh during the pandemic. The songs go much deeper however and appear to be tropes for Zanetti’s dealing with the loneliness and isolation which the pandemic has wrought on all of us.

“Harrisburg Shoes” opens with anthemic guitar chords blaring, followed by booming drum beats before Zanetti sings “and just like that it begins, we’re singing for your suffering.” The song itself could be pure power pop if the band was more jingle jangle and less in your face reverb, but nonetheless it works perfectly. Homeless Gospel Choir is a punk band and this song rocks like any punk song should. There’s even a nice homage to the ultimate punk band, The Clash, in the middle of the song where Zanetti sings, “I’m all lost in the superspreader rhetoric.”

Next up is “Pittsburgh Shoes” which starts out with a slow early 1960’s retro vibe bringing to mind the musical soundtrack of American Graffiti (and I mean that in a 1000% good way). The first 40 seconds of the song deals with what so many of us felt during the pandemic with words like “sitting in your room and every day just feels the same.” But then Derek and crew (Maura Weaver, Megan Schroer, Craig Luckman, and Matt Miller) take the song to a more upbeat place (at least musically), and all of a sudden the listener finds themselves immersed in a distortion fueled, thunderously loud guitar punk rock song. And lyrically too, the tone changes as the song’s protagonist realizes that the sun will rise through the gloom and that real friends made along the journey WILL be there for them…and of course they will be “PLAYING THEIR KAZOOS.” 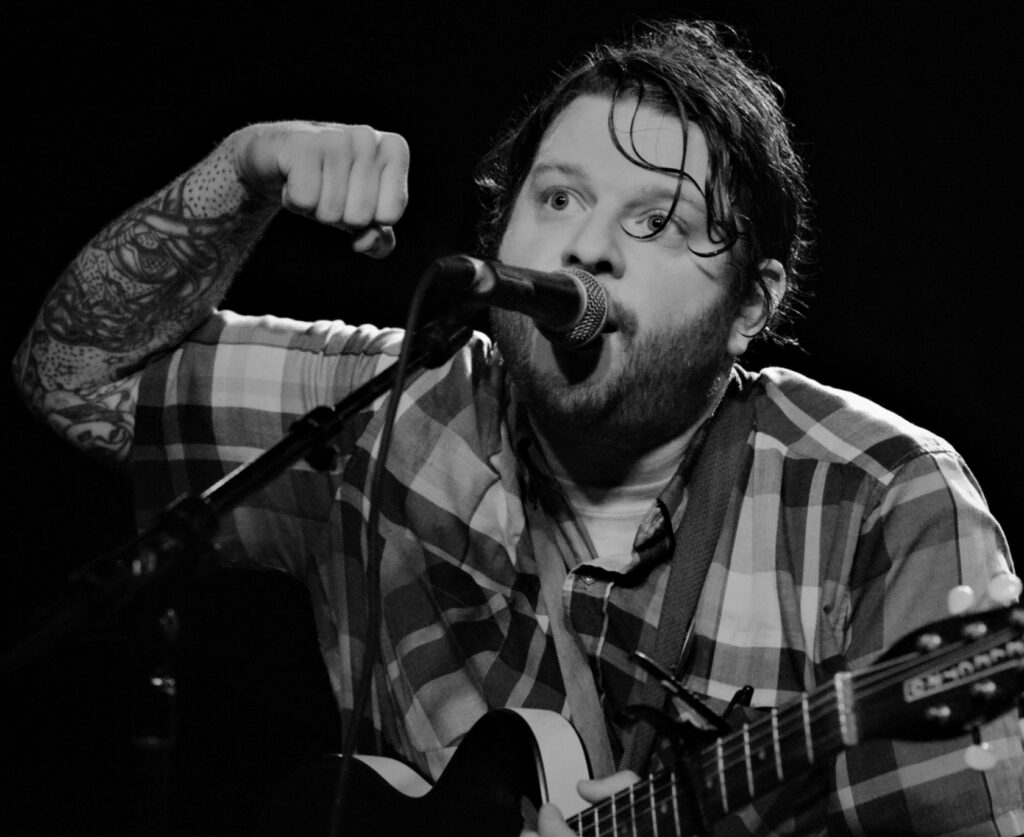 The Homeless Gospel Choir performing in 2019 (photo by Ray Rusinak)

It appears that the use of shoes in both of these songs is a beautiful metaphor for needing to accept change, to embrace change and ultimately use change as a bridge to the past. It came down to needing new shoes in order to get to a new place (beginning) in Harrisburg, PA and then upon finding themselves there, they needed another pair of shoes that would allow them to ultimately make the journey back to their beloved Pittsburgh.

To this one particular listener, these two songs from Homeless Gospel Choir just might be some of the best stuff Zanetti has ever put out. And I for one can’t wait for their new album to drop.

The flip side to this split consists of two ragers from Philadelphia’s (by way of Asbury Park) queer punks Teenage Halloween. Their first song, “Floating,” starts out fast and furious and from there never misses a beat. What appears to be a break up song upon early listens with the catchphrase “I don’t want your empty promise, I don’t need your easy fix,” it appears upon further listening to be a retort to present day politicians as well; especially when you realize that the response to the previous refrain is “I wanna burn the city down.”

Musically the band embraces all kinds of styles in less than two minutes, something which might turn off some listeners as a band trying to do too much all at once. But in this instance, I didn’t feel this to be the case at all. Quite the contrary, the varying styles blend together seamlessly, with the tune starting out with a classic pop punk structure before climbing into an almost ska like rhythm for the bridge and then we get a scorching psycho-billy guitar riff before we fall back to the pop punk ending of the song. 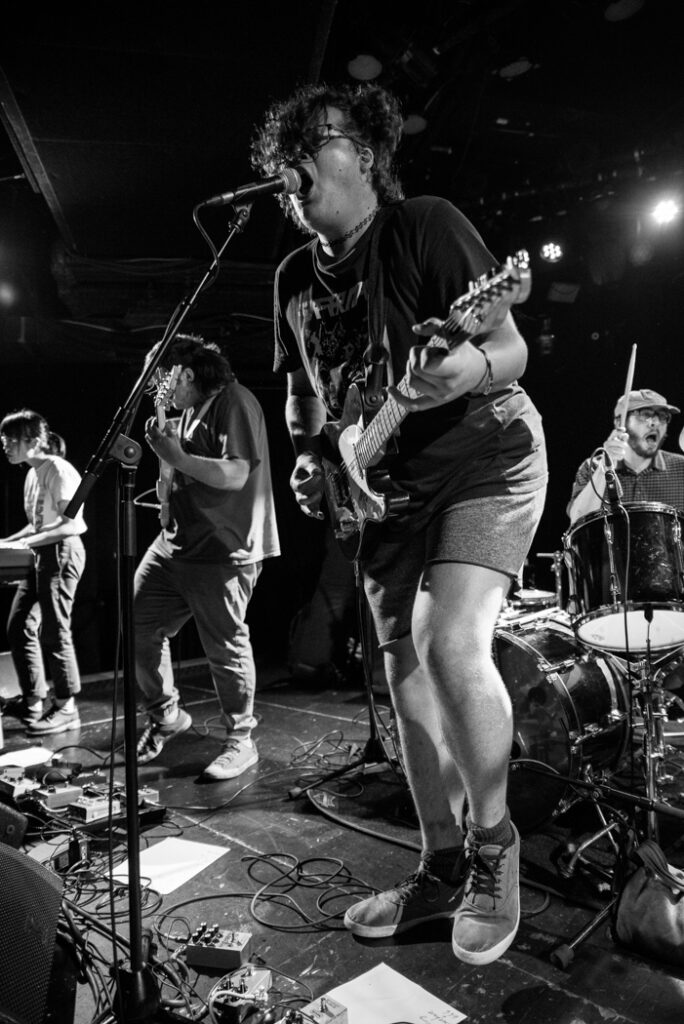 The final song on the split is entitled “Burn,” and as the title suggests it is a burner. Again, Teenage Halloween manages to pack a whole lot into a mere 1:50 minutes of music. The opening notes of keyboards lull us into thinking we might be getting a slow ballad, but this lasts all of three seconds before singer Luk Henderiks begins belting out with their raspy vocals. Listening to “Burn,” you can almost feel how much fun this song is going to be in a live setting, yelling the words along with the band.

All in all, this split EP shows great promise of things to come in hopefully the not too distant future from both Homeless Gospel Choir as well as Teenage Halloween. Now we can only hope that this damned pandemic burns itself out so that we can get to see both of these bands (amongst many others of course) live once again.

The Homeless Gospel Choir/Teenage Halloween split EP is available now from Don Giovanni and on all major streaming platforms.