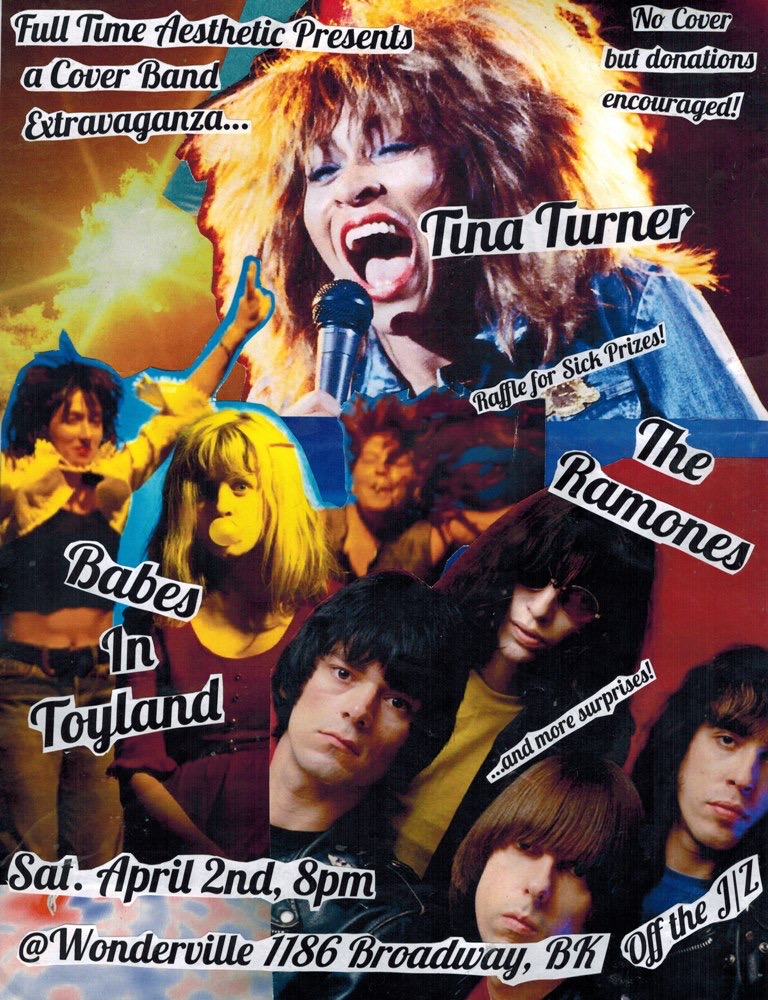 Flyer designed by Kate Bell (of Creek and Kills)

FTA is hosting our very first benefit show on Saturday April 2nd at Wonderville in Brooklyn. We went all out and made it a cover show featuring local musicians pretending to be The Ramones, Babes In Toyland (featuring yours truly on drums and FTA contributor Chantal on guitar/vocals), and Tina Turner. Yes you read that lineup right! You will never see that lineup happen except in the fantasy realm of a video arcade in Brooklyn so why not come on out and help raise money to keep this humble blog afloat??? It’s going to be a very fun night and we will be holding a raffle for some cool prizes (keep an eye on our social media for what we have to offer).

This fundraiser is to help bring in money to cover hosting and other expenses because if you haven’t noticed, the platform is currently ad free. I would like to keep it that way as long as possible, but it is not a free venture for me and has thus far been financed directly from my own personal money. I do love doing this first and foremost, and did not start this as a money making venture per se, but to be able to get some revenue coming in to cover expenses and maybe even eventually pay myself and the contributors is an exciting prospect. We won’t get there entirely from one benefit show, but every bit does help. There may come a time when ads become something that has to happen, but for now, I’d like to go a little old school and a little bit more punk rock and try some fundraising that way. There is nothing more classic than a benefit show so here we are!

The show is no cover (except for the songs!), so no one turned away for lack of funds, but we will be passing the hat for donations throughout the night and as mentioned, there will be a raffle for some pretty sweet prizes including a $50 Sam Ash Giftcard and merch bundles. We also have a donation button here on the site for anyone who is unable to attend the show but would like to make a contribution anyway. You’ll be helping this nerdy operation keep going and will be immensely appreciated! (Just scroll all the way down to find said donation button.)

Now go ahead and get yourself in the mood with a few songs you’ll get to sing along to at the show:

If you’re ready to get screamed at AND see me smash the toms a lot, then this set is for you!