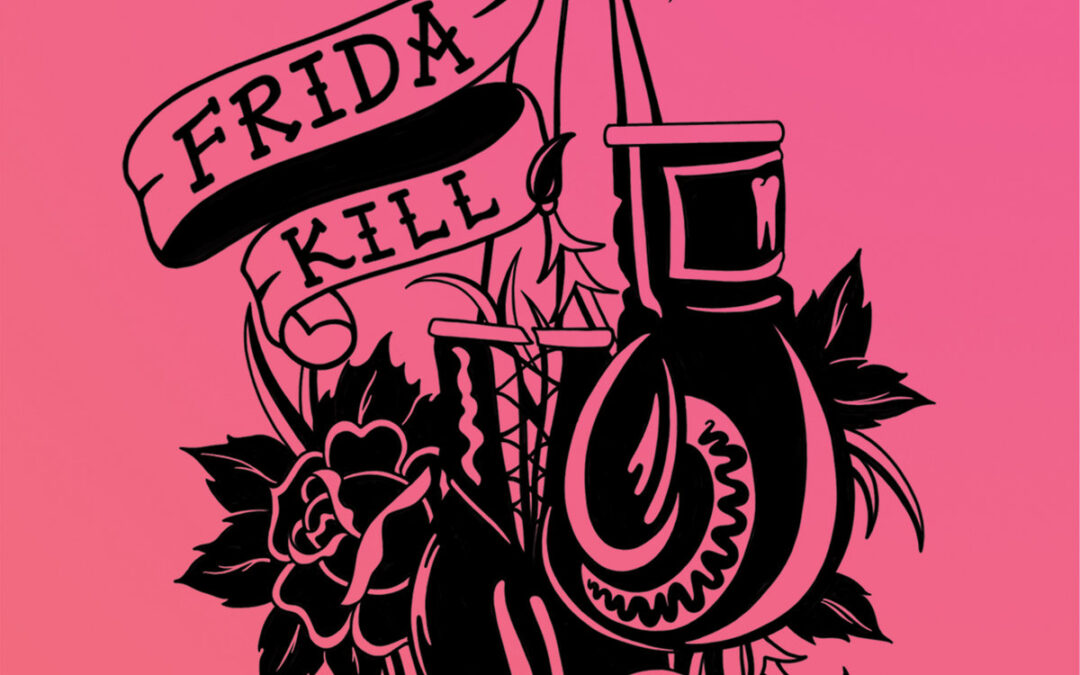 Frida Kill builds on what it means to be a feminist punk band on their first EP 1, delivering all the energy of women-on-the-verge through their own original lens that is specific to the hustle of right now, trying to survive and thrive in New York City in 2022. But what are these Brooklyn superstars on the verge of exactly? Of turning over bullshit racist power structures, of surviving and transcending transphobia, of living through last night’s hangover, of dancing with their own demons.

EP #1 starts out with the rollicking political energy of “Mujeres Con Mangos” (which also has a fantastic video directed by Holly Overton, with additional cinematography from Tasha Lutek). Maria Lina provides the lead vocals and lyrics on this first track, and she writes and sings from both her own perspective, and from the point of view of a Latinx woman selling mangos on a Bushwick street being harassed by police and ICE. There’s a very clever double meaning of the word “ice” in Lina’s lyrics here; the mangos are sold on hielo (ice), but ICE, of course, is also the nefarious force coming for the “Mujeres Con Mangos.”

Lina says that “Mujeres Con Mangos” was fueled by “reports of undocumented workers being arrested for selling churros in NYC and of a memory I have of passing by an old family friend Margerita (who sells mangos all year round on Knickerbocker Ave) and she was getting a ticket by the cops in the bitter freezing cold for selling mangos. She was very upset but did not back down. I stood with her for a while, bought some mangos and gave her some money and a hug. I feel like a lot of the time these people that provide fresh fruits, treats and ice cream for us on the streets go unseen. They spend time preparing these small things to make money to pay their rent, send their kids to school, send money abroad to their families, just like everyone else. They get up everyday and go to work outside in the heat, in the freezing cold, harmless and out of the way and still, the system finds a way to criminalize them. I wanted to write a song for them, give them a voice, I want people who have never thought about them to be kind, have empathy, and see them when they pass them. I want people to appreciate them. I want people to help in any way they can and I hope the message gets across with my song. I have my mother to thank for always instilling empathy to my siblings and me. She opens her doors to anyone and is extremely helpful in her community.”

Maria Lina and her bandmates are most certainly carrying on her mother’s tradition of being helpful in the community with “Mujeres Con Mangos.” Nothing is more feminist and punk than that.

After “Mujeres Con Mangos,” EP 1 moves into “Get Over It” and “Here’s Hoping,” anthems of trying to navigate social landscapes built on ignorance. Frida Kill is an ever-shifting (and therefore very exciting!) ensemble in terms of who is playing which instrument or singing/writing the lyrics, and in these two songs, Lily Gist (who was on bass for “Mujeres Con Mangos”) shifts to guitar and lead vocals. “Get Over It” rides on an aggressive guitar riff while Gist asks if she should even try. Gist is very open with audiences at Frida Kill’s live shows about the challenges she’s experienced as a trans woman, and her pain and frustration with others’ cruelty is palpable in her lyrics. The intensity of “Get Over It” is also accentuated with fantastic drum fills from Gaby Canales. “Here’s Hoping” shows the transphobic cruelty that Gist has faced even more directly, as she quotes verbatim things her high school classmates said to her when she first started transitioning: “die alone/ friendless/ fail / I’m hoping.”  Clearly, Gist and Frida Kill are succeeding with all kinds of punk rock fun and building community along the way, so all those assholes can eat their words.

The fourth intoxicating track on EP 1 is “Demons,” and once again the Frida Kill women shift roles and instruments, and Jeanette D. Moses puts down her guitar for a moment and steps up to be the frontwoman. “Demons” will make you bounce around, as Moses brings so much fun and humor into her lyrics: “Weekends I can’t remember / Late nights I don’t regret / Hangovers that burn forever / Ah fuck is that my ex?”  So it goes with the wild ride (and heavy anxiety) of working hard and playing hard in Brooklyn these days.

EP 1 closes out with the more introspective “Zine Song.” If “Demons” catches the euphoria of a night out, “Zine Song” is waking up with a new lover the next day. There’s a very cool ascending guitar line on this track coming from Gaby Canales this time, who’s stepped out from the drums to strap on the lead guitar. Maria Lina is back on lead vocals (and drums) for this one: “Sloppy lovers mind / intertwined…in and out of dreams.”

The minute you finish listening to EP 1, you’ll want to start at the beginning again! With mixing and production from Justin Ferraro and Jed Smith (“Here’s Hoping”), this is DIY punk rock at its best. Let’s hope that a full-length album is in the works soon.  n the meantime, grab this EP and go check out Frida Kill at one of their many high-energy shows around Brooklyn.  Nothing to do with these demons but dance with them…

EP 1 is out now via Insecurity Hits and is available as a limited edition tape and on all major streaming platforms. 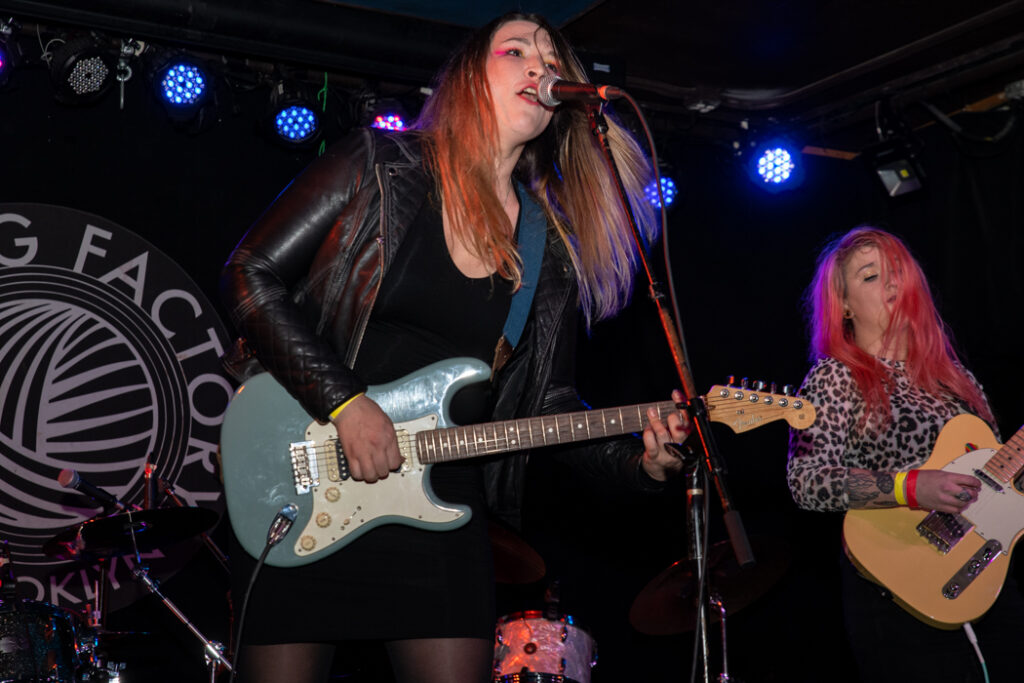 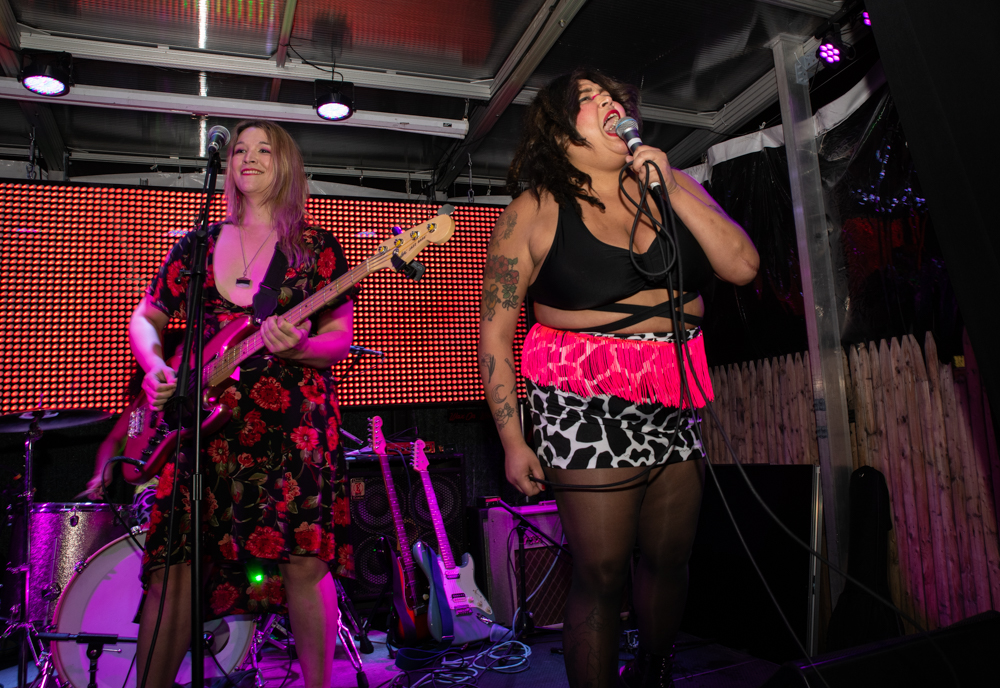 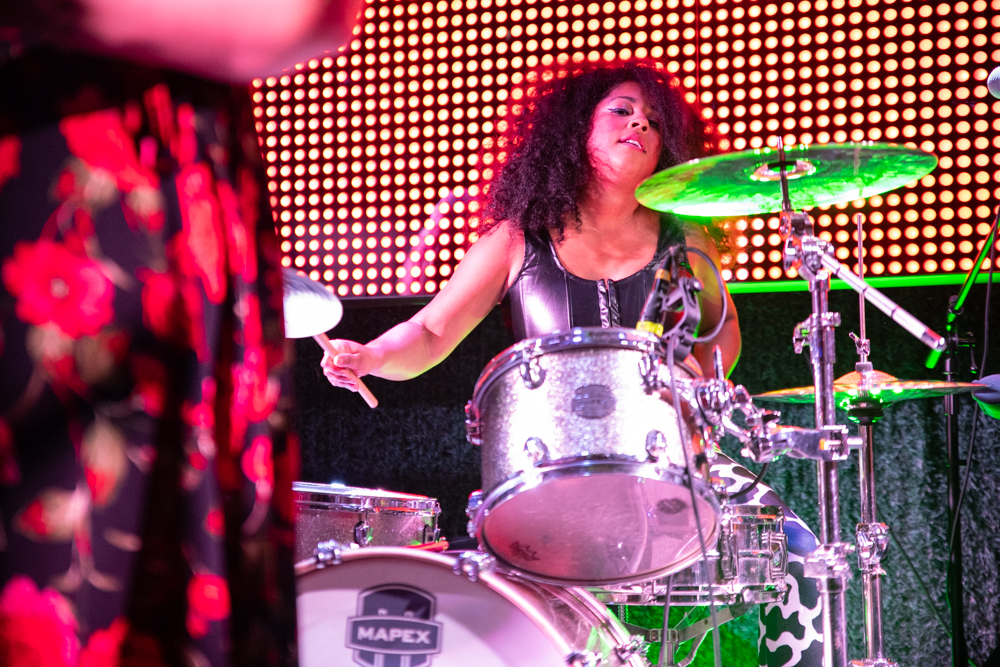 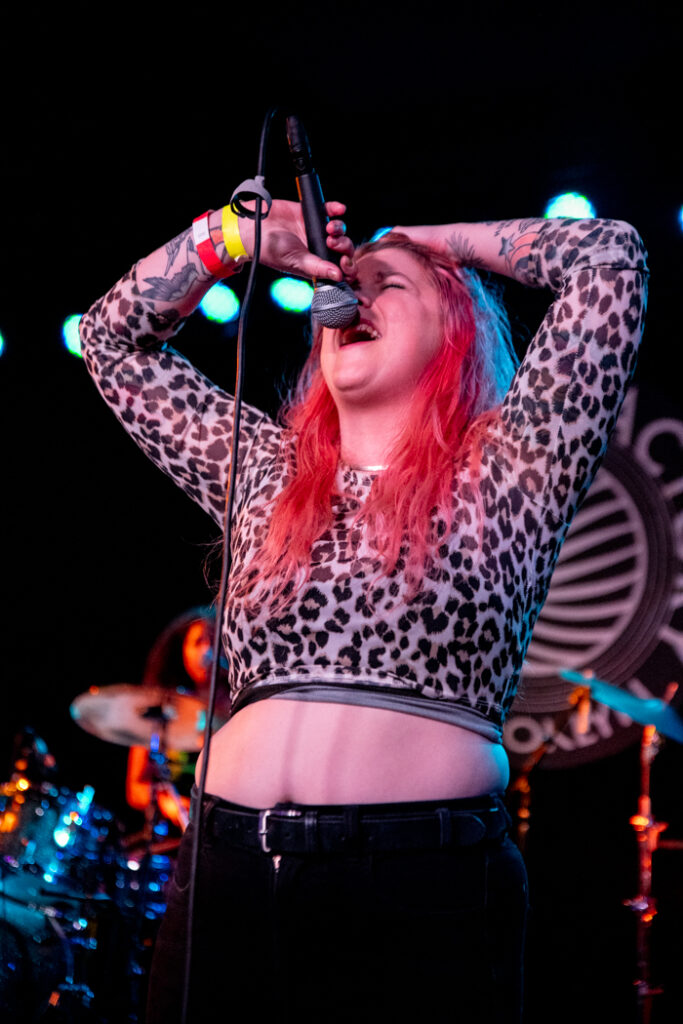 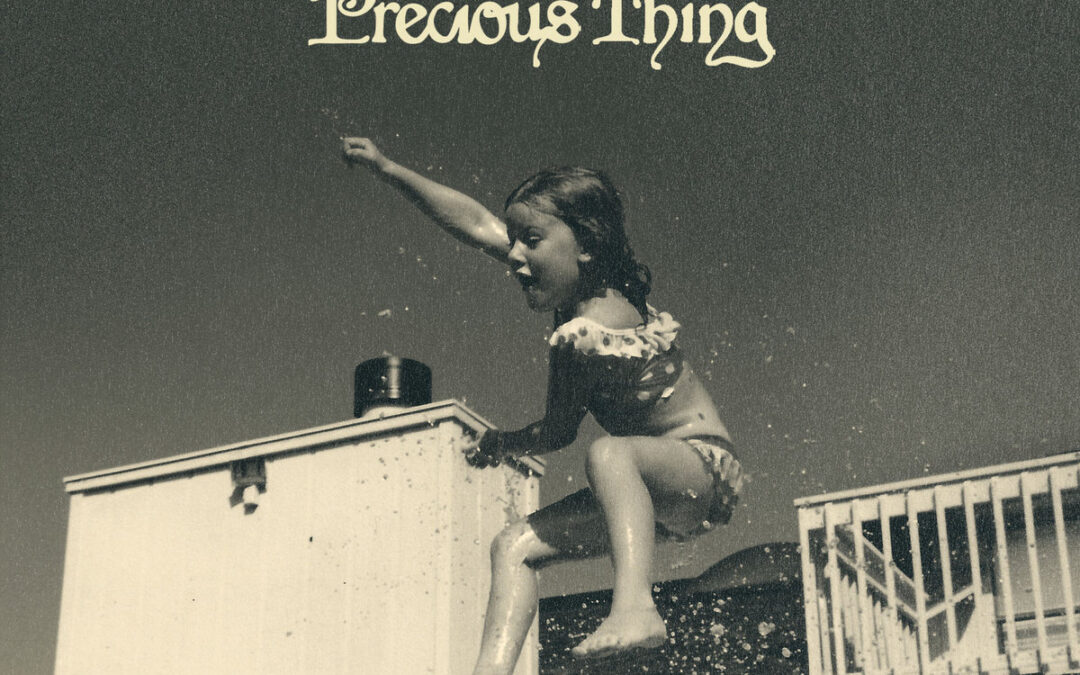 It makes perfect sense that in October 2020, Allegra Krieger drove across the country from Brooklyn to California to record her second and most recent album, Precious Thing. These ten contemplative songs wash over you like the daydreams you have while watching the world fly past outside the car window on a long road trip. The music is at times lush and sweeping, and in other moments sparse and intimate, with only Krieger’s voice paired with an acoustic guitar or a few piano notes. Her lyrics are full of keen observations of the beautiful and painful world around her, and overall the album is a calming, comforting balm coming out of the tumult of these past two pandemic years, both for Allegra Krieger and for us, her listeners.

The album’s first track, “Wake Me If I’m Asleep,” opens with an extended instrumental introduction before Krieger’s voice breaks through over the guitars, singing: ”the ambulance’s siren/ mixes with the violin/  there’s a body on a bed rolling down the street/ while looking out of my window, I call you up on the phone/ say I hope you get home all right/ wake me if I’m asleep.” There’s a consistent theme here of wanting to hold the things you love very close, while also knowing that everything is constantly shifting, speeding by, and you can’t keep these dear things close to you for too long, and maybe it’s wiser to step back, to love with a looser grip.  We hear this realization again in “Taking It In,” the album’s third track (which also has a gorgeous video shot at Coney Island): “No, I don’t want to lose it / reaching / reaching / gone.”

All ten of these songs are gems, but my two favorites are “Let Go” and “No Machine,” both of which have surprising meandering melodies that really show off Krieger’s unique songwriting style. In “Let Go,” the piano is in unison with her voice in some places, accentuating the unexpected turns of the melodic line, as the lyrics again bring us back to the challenge of accepting inevitable changes: “nobody wants to be unhappy/ but nobody wants to let go.” “No Machine” features an absolutely regal (and again, wonderfully surprising) trombone sound from Kalia Vandever as Krieger’s lyrics embrace crises of faith and what it means to be human and flawed: “soaking up the remnants of pain, the absence, the choice, the excessive noise, the presence of some higher power to turn away from…no automated machine can keep up with me/ what I feel is what I’ll be.”

With beautiful production from Luke Temple, and an outstanding ensemble of musicians backing her up, Allegra Krieger has gifted us with a gorgeous and intimate journey in Precious Thing. It’s an album that you get lost in, that you float away on, an album for dreaming and waking up to see more clearly.

Precious Thing is out now via Northern Spy and available on Bandcamp and all major streaming platforms.