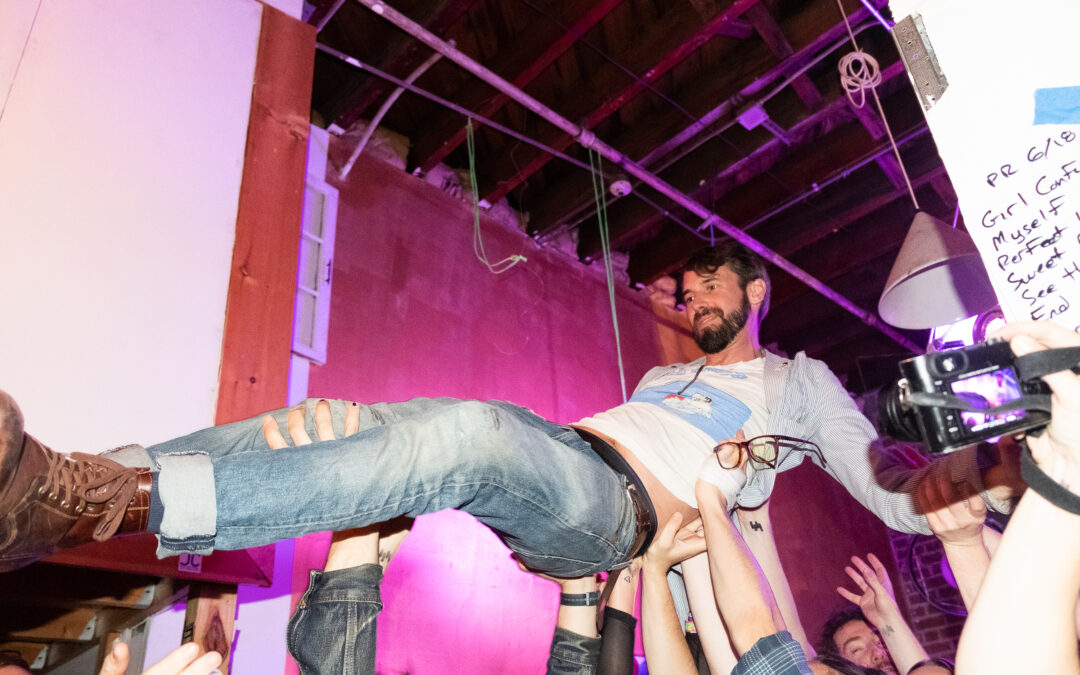 I’m not crying, YOU’RE crying! Grief manifests itself in different ways, and the loss of our beloved Brooklyn DIY space, Pet Rescue, which just closed its doors after a legendary 10 year run has me oozing all the feels. DIY spaces come and go. Often, many shutter before we get a chance to check them out, and if one lasts more than a few years even it’s a miracle. How Pet Rescue managed to last a full decade without even the cops being called once is beyond comprehension. The place may as well be a thousand year old goddamn unicorn.

If you’ve ever been to Pet Rescue’s loft space—tucked behind 2 large truck beds on the loading docks at 346 Morgan Ave— you understand. And if you haven’t, I’m truly sorry. Brian LaRue (Safe Houses FKA Shelter Dogs) found the place on Craigslist in 2012, and over the next 10 years, hundreds upon hundreds of the best local musicians, as well as countless bands touring thru NYC, would find a safe, friendly, and inclusive place to connect (and sometimes crash) with the other weirdos in the Brooklyn community. Barely held together by found lumber, duct tape, and old windows from Brian’s parents’ house—and definitely not legally zoned for residential use—it felt like home every single night and I fucking loved it. 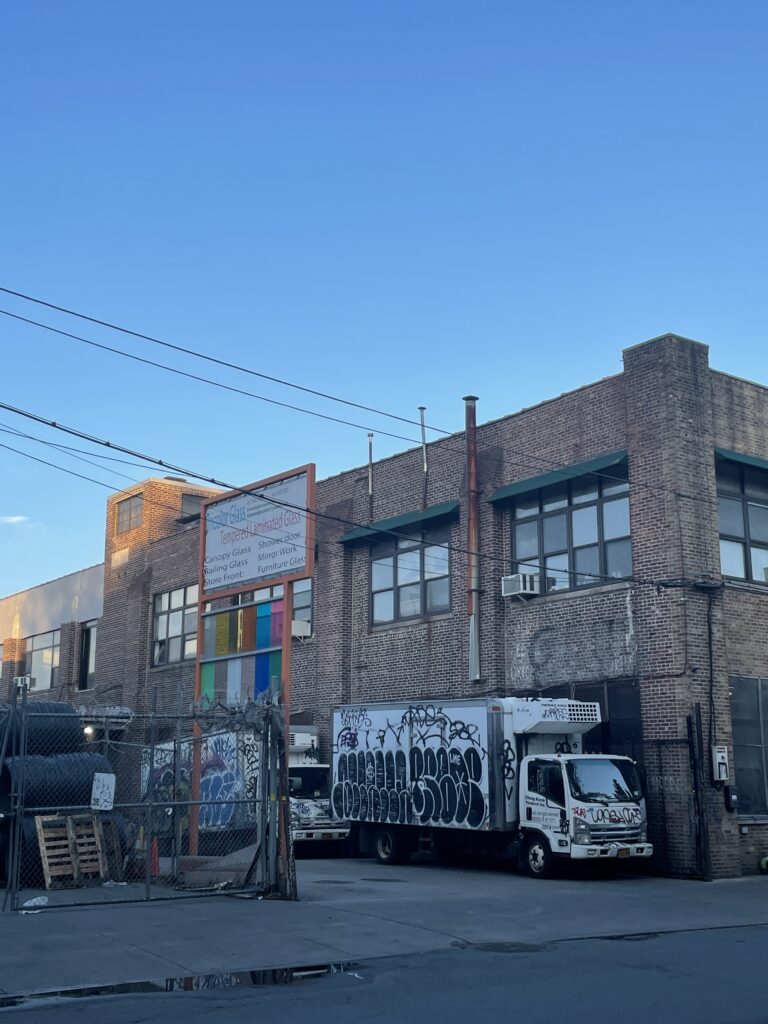 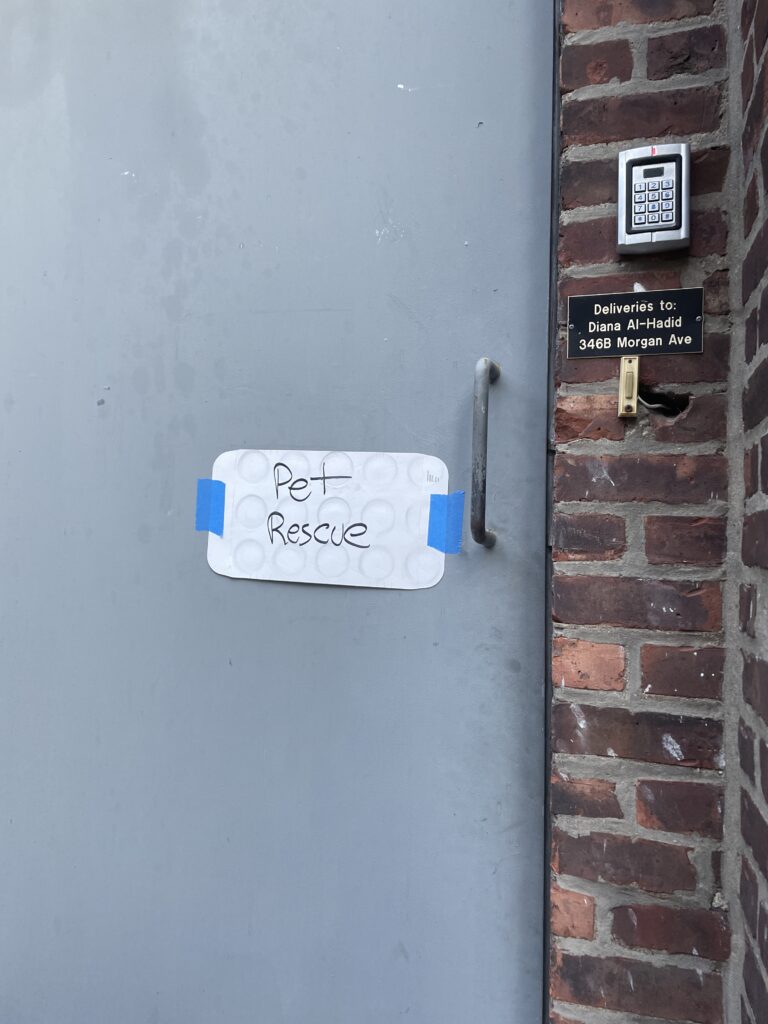 But LaRue actually lived there for the first 6 years and change, as did PJ Levine (La Di Das, Significant Others) who took over the place and moved in from 2019 until he was evicted last week. It was nothing short of a very carefully calculated decision by LaRue as to who would take over Pet Rescue upon his departure, as the integrity of stewardship of the space was paramount in passing the torch. PJ didn’t miss a beat fostering and continuing the ethos of Pet Rescue as his own, navigating through the darkest times of the pandemic which befell him shortly after being handed the keys. 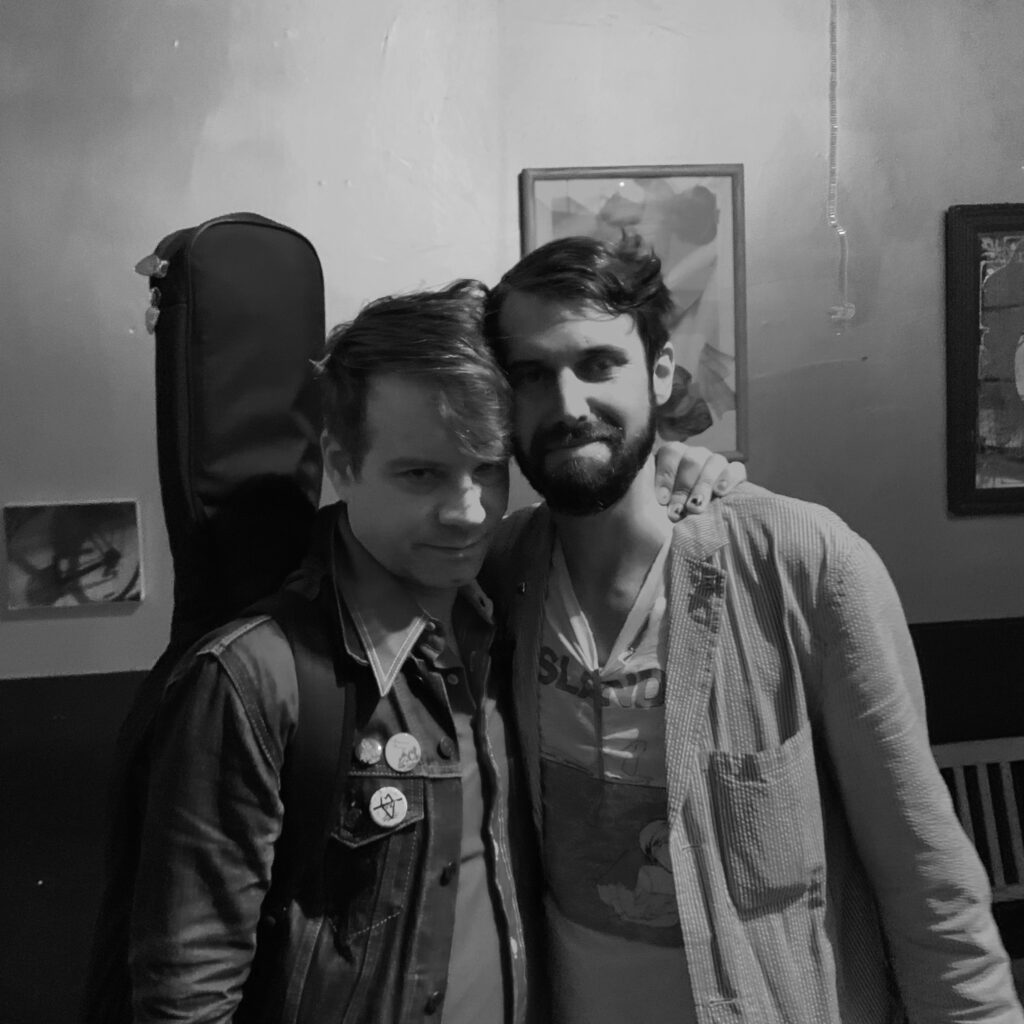 So obviously Pet Rescue wasn’t all sunshine, bubblegum, candy and roses. Running a DIY venue—especially in Brooklyn—is HARD. There was the constant and looming threat of being shut down, the poorly ventilated sweltering summers and freezing winters. Not to mention hosting shows in your single room not-exactly-legal apartment in itself can be a huge pain in the ass. So it’s really not at all surprising that LaRue never intended to start a venue. He just wanted to throw parties and have a place that his and his friends’ bands could play. Steve Perry (The Planes) recently said in the final weeks “It’s not a cultural landmark, and was never trying to be. It’s just a good fucking house party, with loud fucking bands, and cheap fucking beer. And that’s why I think I love it so much.”

While it was a high honor that my band, Nihiloceros, got to return and play the penultimate show a week before the doors closed for good, it was LaRue’s band (now Safe Houses) who fittingly played the final bash along with The Rizzos, The Burning Sun (from Burlington VT), Significant Others (Levine’s band), and Reclining Nude. Brian beautifully and quite perfectly summed up the spirit of the place in a spontaneous off the cuff toast mid-set that commanded the complete attention of every soul in the room. “It was you guys that saw more in this place,” LaRue said. “And you taught each other how to treat each other.” That’s really always been the heart of Pet Rescue; people gathering and making space and working together to help one another out and have a good time. 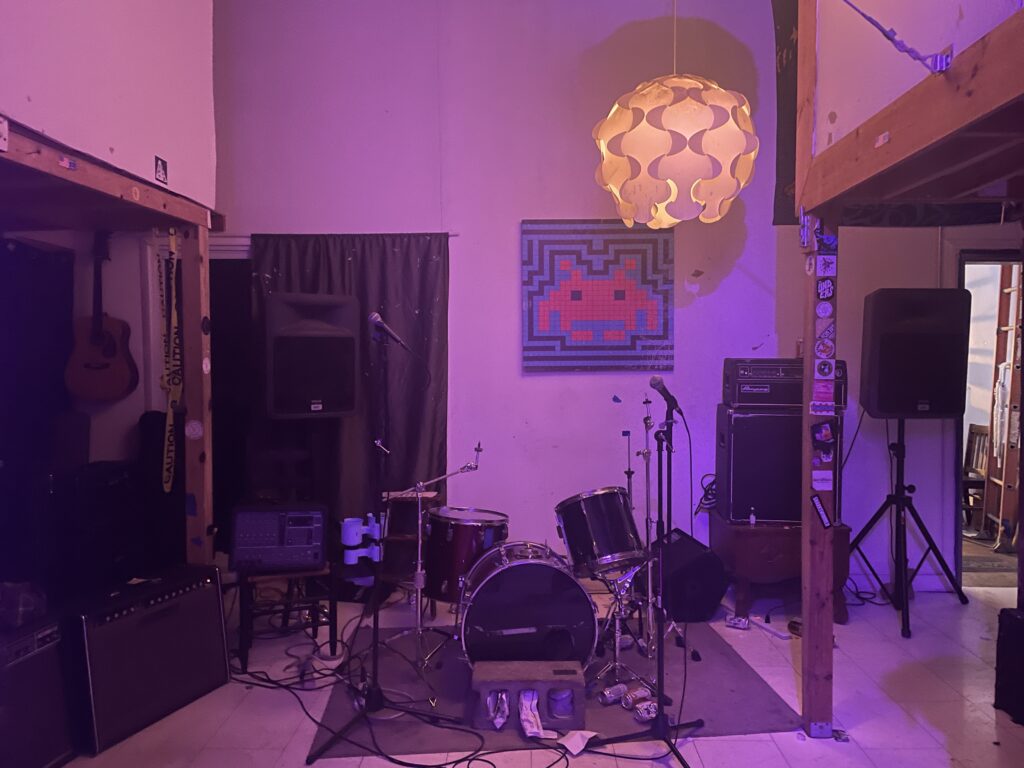 Pet Rescue was really a testament to embracing the weird curves life puts in your path; the joyful surprises and happy accidents. Jon Daily (The Black Black, Kissed by an Animal, bandNada) added “Brian nailed it in his toast. Pet Rescue is about saying yes to things slightly outside of your comfort zone and following the opportunities that arise…and rock and roll. It’s also about rock and roll.” 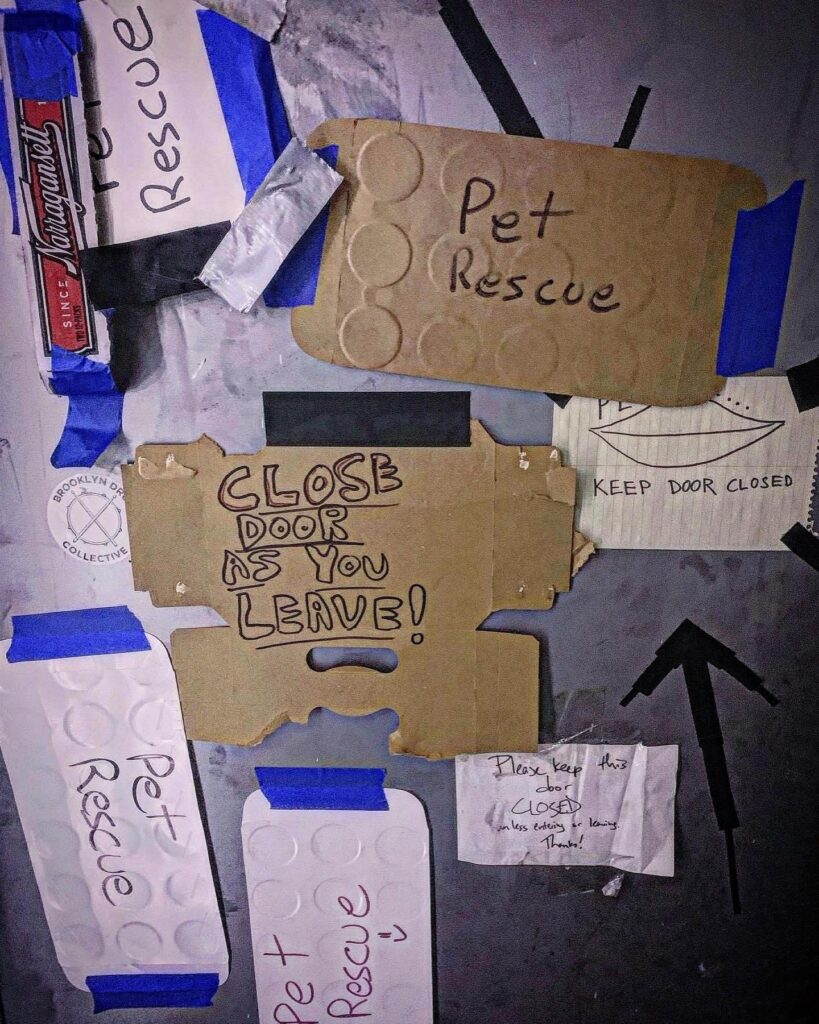 Pet Rescue was really a special place, built and run by special people who put in a lot of thankless work and lived the unseen stresses and hassles for years just to give us this place to exist and play. And we all breathed life into that old cozy loft week after week, month after month, year after year for 10 fucking years. That’s nothing short of amazing. And that’s also why it’s not really ever gone. It’s the people who make up Pet Rescue and while it’ll be sad to know the wood and the plaster has all been torn down and gutted, its soul will never die.

It lives on in places like East Williamsburg Econolodge, Catfarm and Rubulad. Jon Daily (who runs Econolodge) called the final show “a perfect finale for Pet Rescue—a celebration, not a funeral.” The very final set at Pet Rescue fittingly began well after midnight technically into the next morning of the next day. Justin Ferraro, bassist of The Rizzos, leaning into the microphone saying (now years after their infamous show there where someone literally tore out all the plumbing) “We are the Rizzos and we’re here to kill Pet Rescue…again.”

Scroll down for pics of the final Pet Rescue show (photos by Jeanette D. Moses) 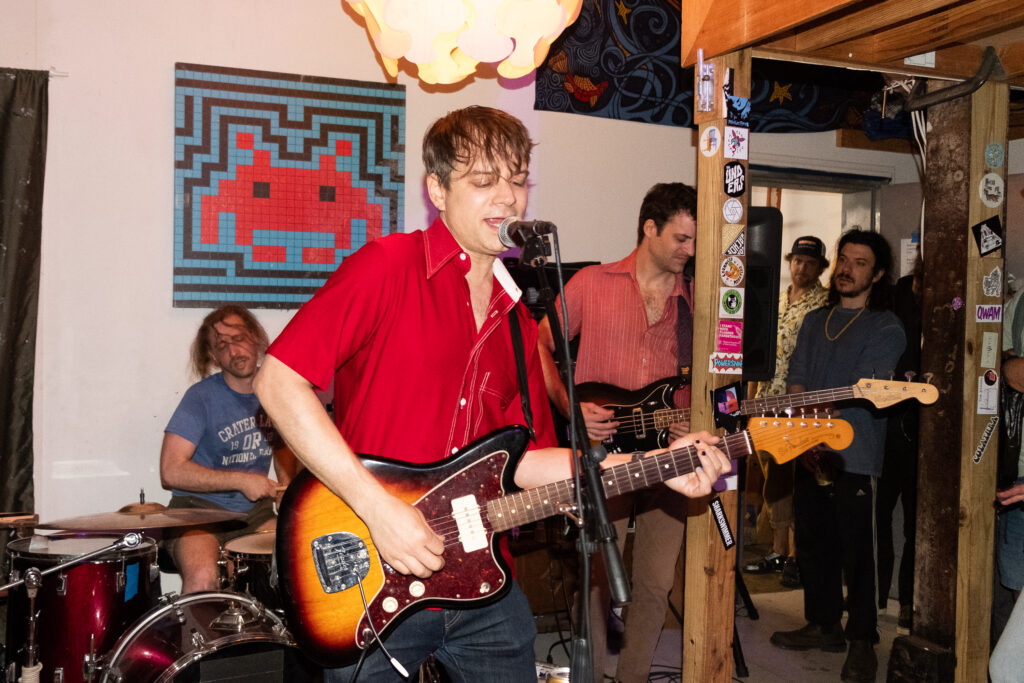 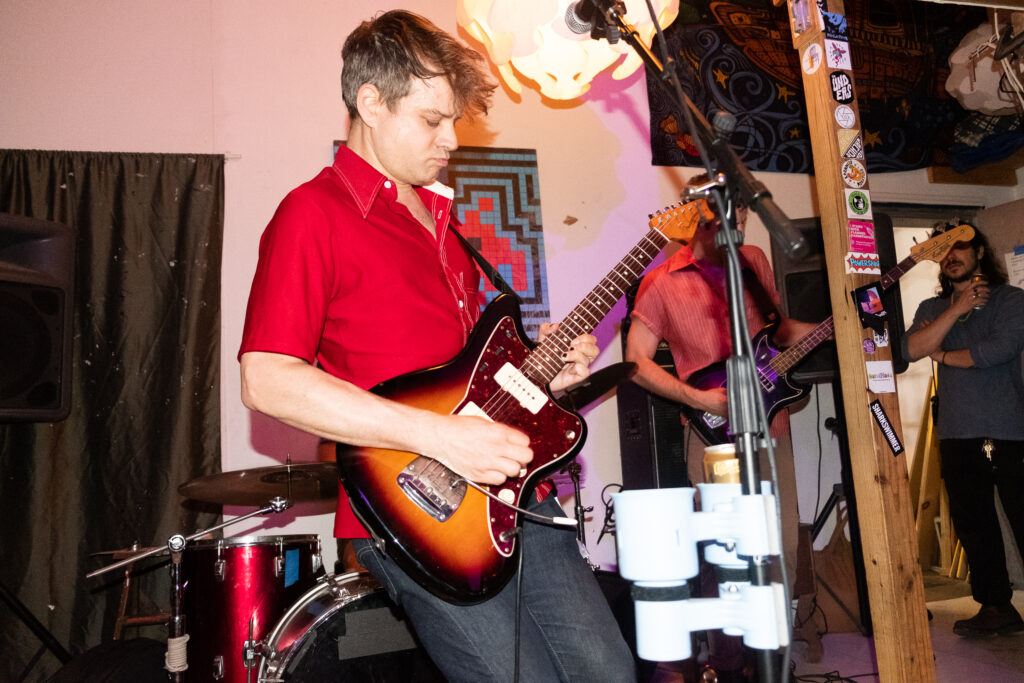 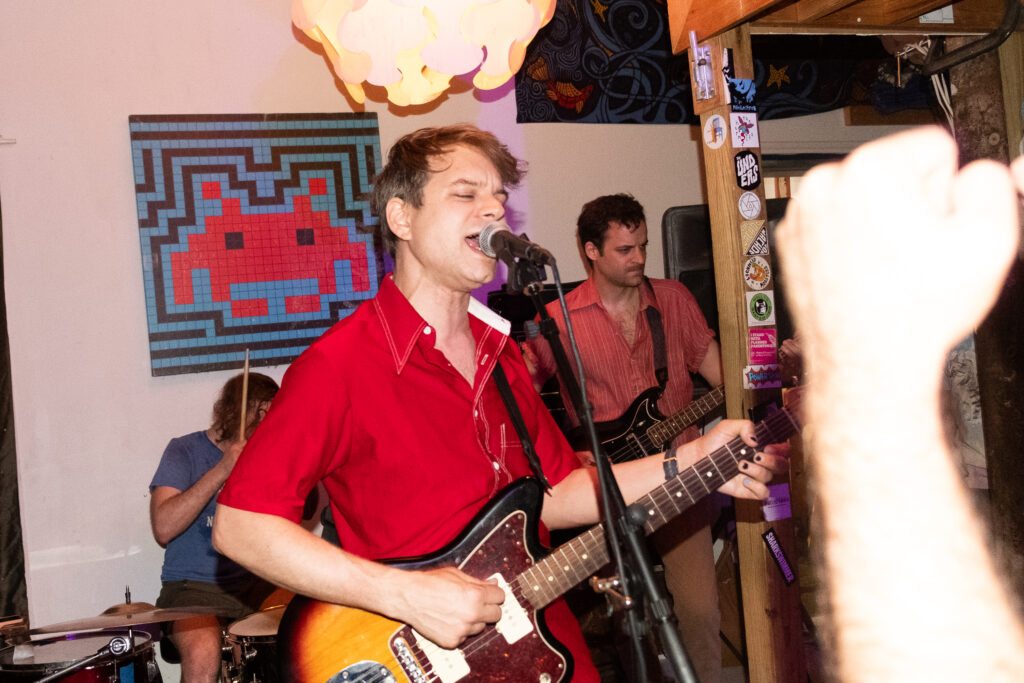 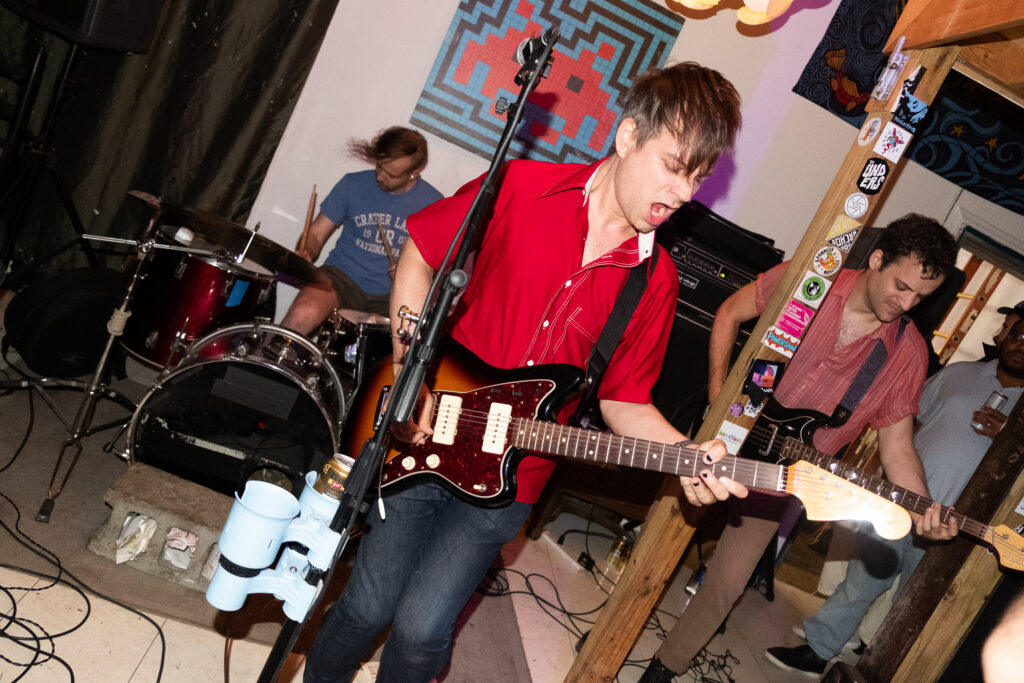 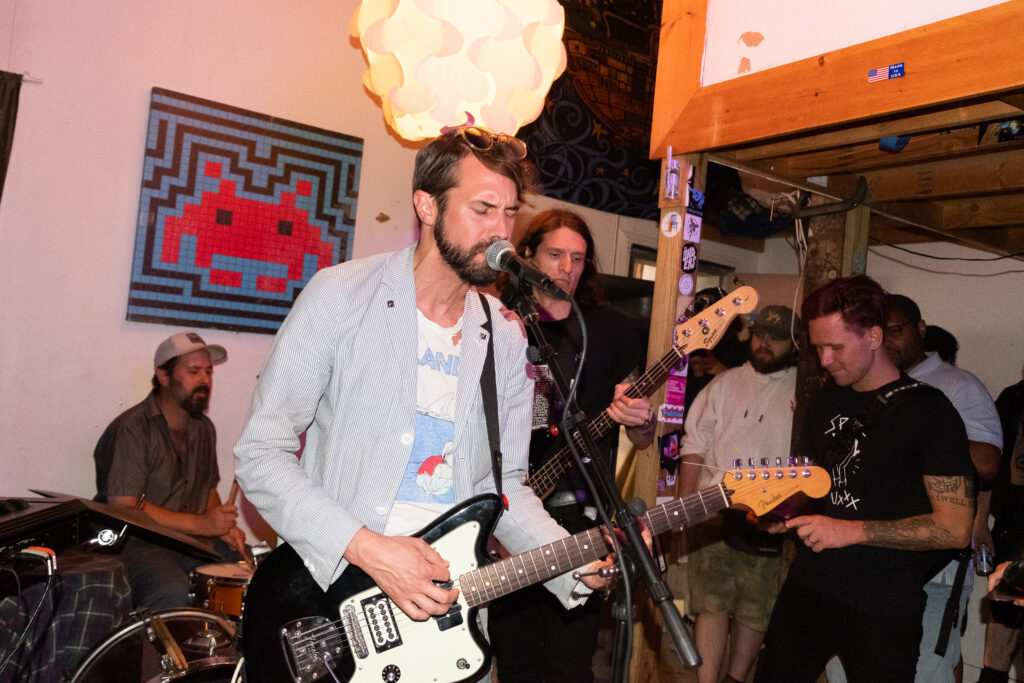 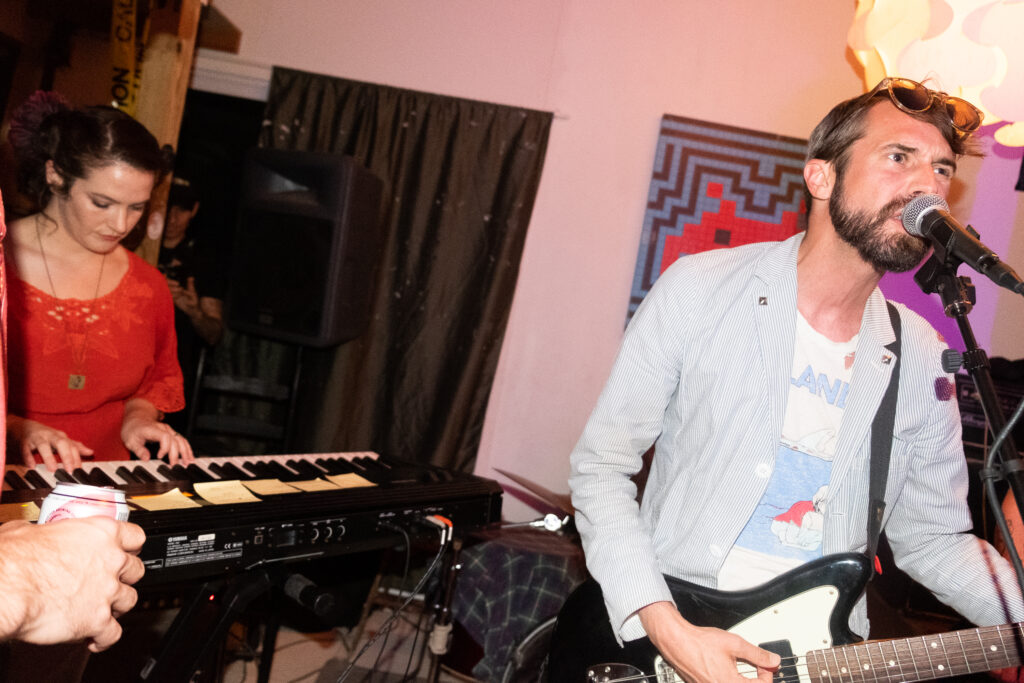 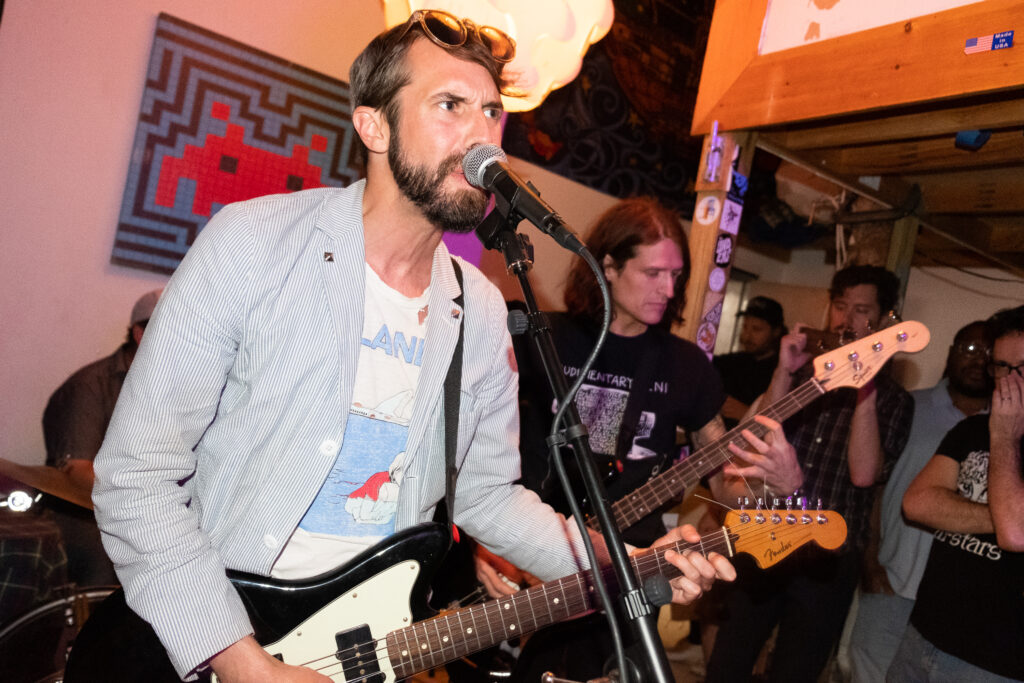 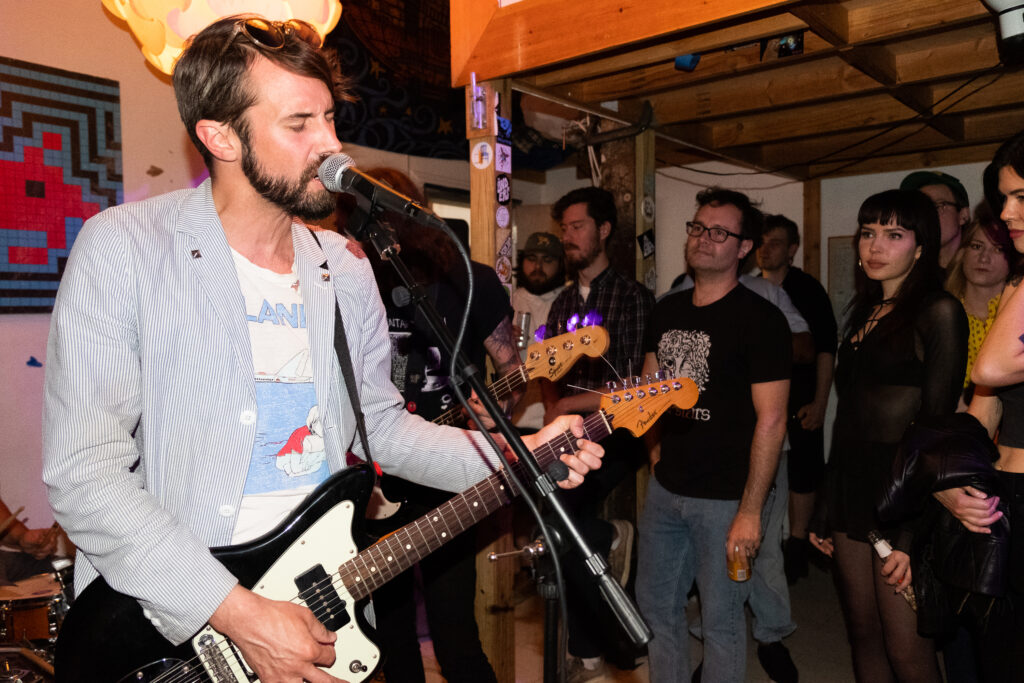 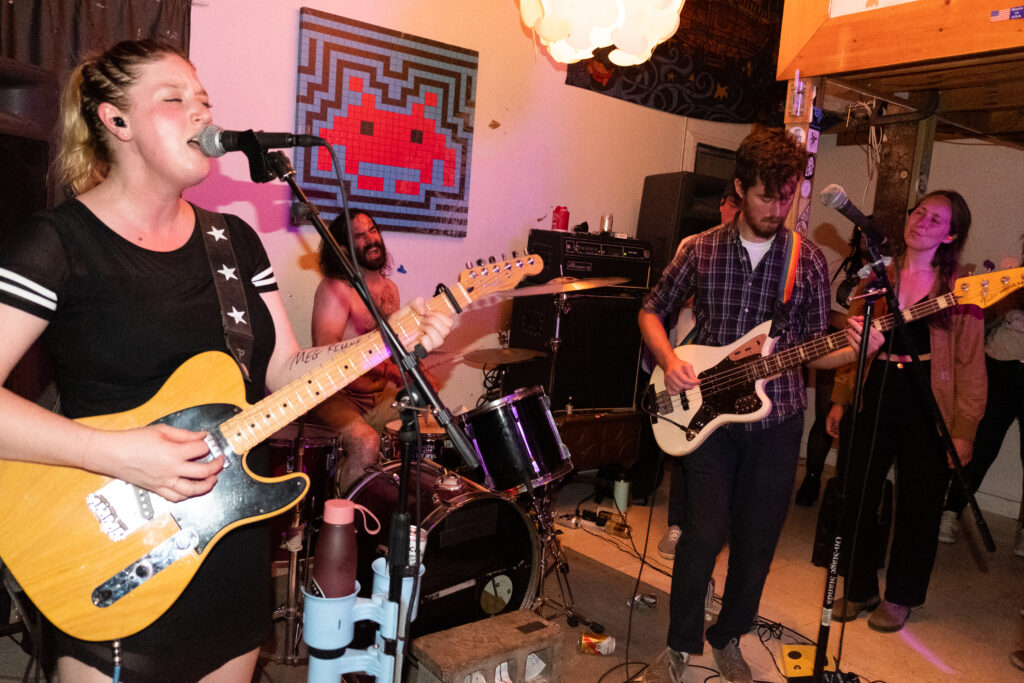 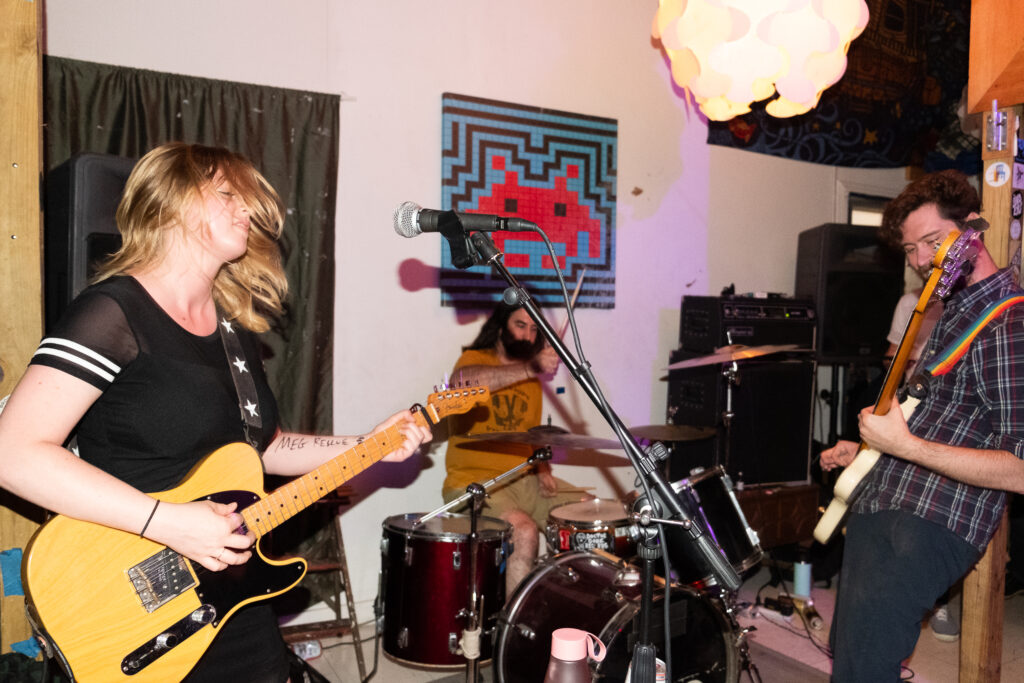 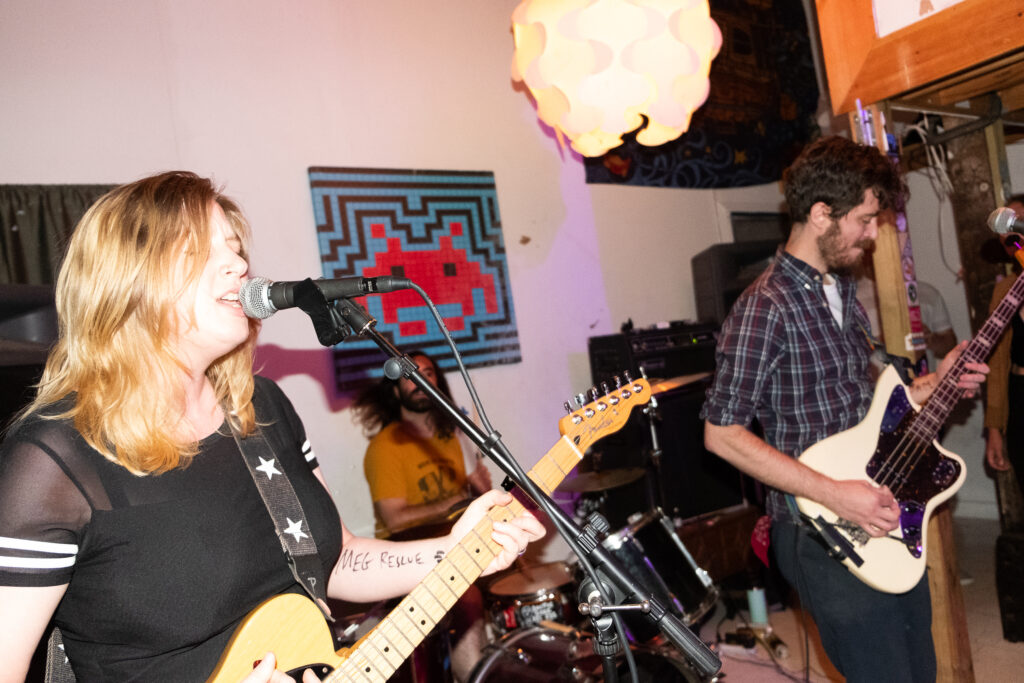 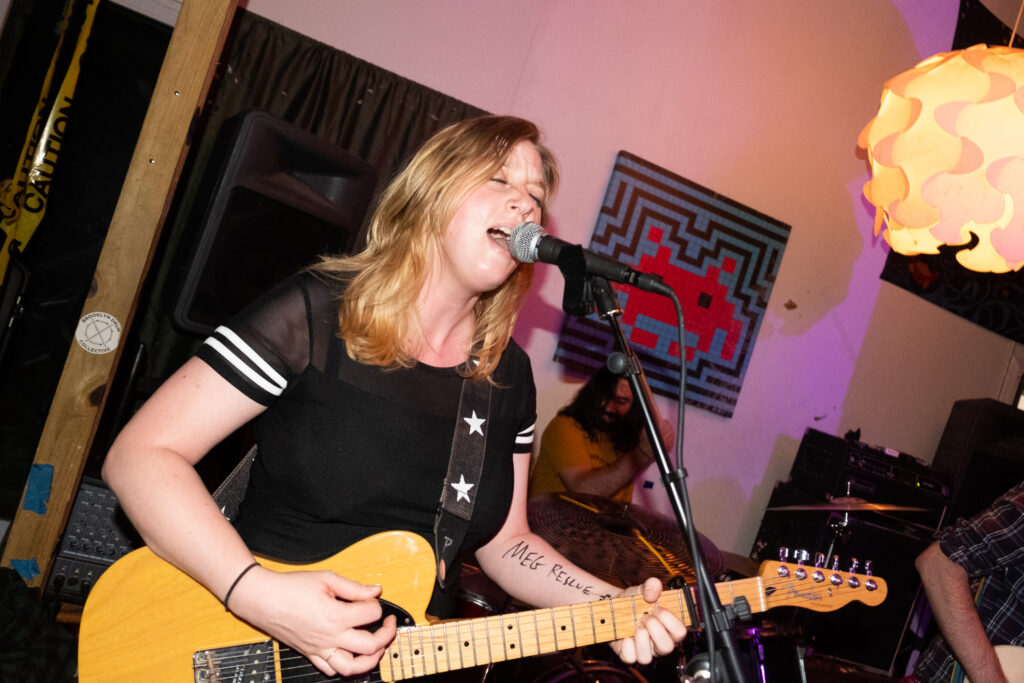 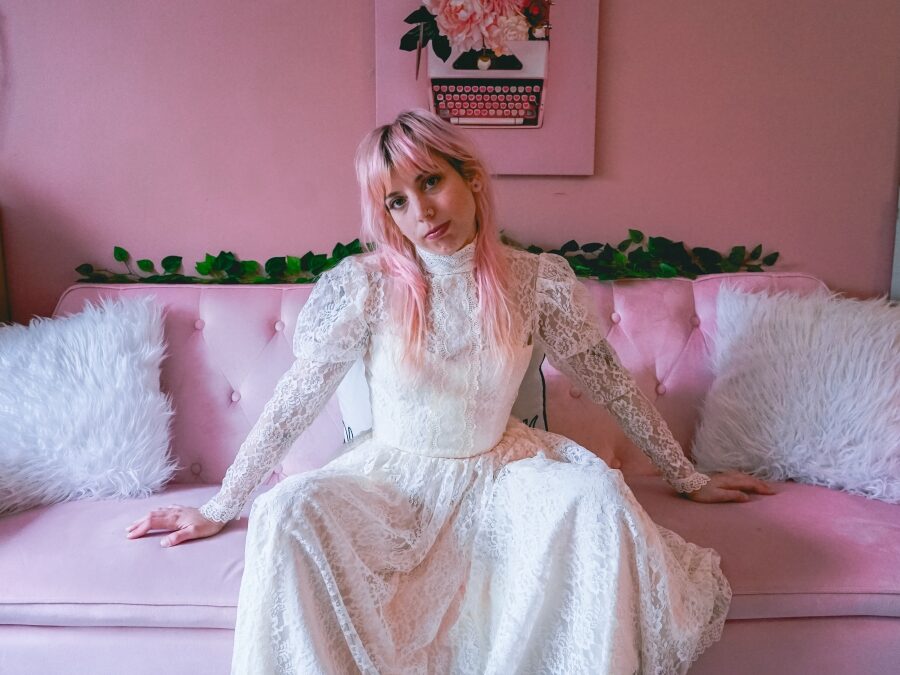 Let’s talk about Dopamine for second, Debbie Dopamine that is. Their debut single, “Eat Cake,” came out very recently along with a pink frosting music video directed by FTA contributor Jeanette D. Moses, with the help of several members of local bands who contributed to the creative process, but we’re here to talk about Debbie.

Debbie Dopamine is the songwriting project of Katie Ortiz (vocals/guitar/synth) who self-describes as “a marriage of indie pop sensibilities and grungey guitars, constantly teetering on the edge of a breakdown.” The three piece band is rounded out (or triangulated about) by Dylan LaPointe (bass) and Zach Rescignano (drums) and set to release their debut EP, Pets, in July.

Those familiar with Ortiz’s other projects (Mean Siders, batsbatsbats ghostghostghost, The Senior Year, etc) already know she has a keen understanding of melody and astute execution of infectious hooks often landing not quite where you’d expect. I’ve had the pleasure of working with Katie in the past, so I have witnessed firsthand her ability to expertly craft lyrical quirk and embrace playful song structure that zigs and zags perfectly. 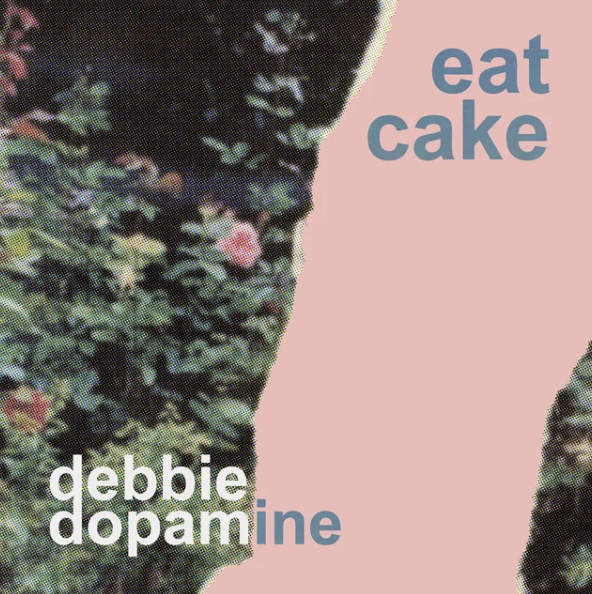 “Eat Cake” delivers on all the levels a pop song should, due much in fact to the talent of its members, but also the organic nature of the project itself. The Debbie character, a longtime figment of Ortiz’s imagination, was just waiting for the perfect catalyst of pent up creativity and to cross paths with equal measures of vulnerability, frustration, and fear. Ortiz saying via a press release: “The video is about exploring the whimsical and disorienting world of an unstable, dissociated mind. Written in the midst of lockdown, the track explores the terrifying and magical world of extreme isolation exacerbated by emotional instability. You might feel that it’s safest to stay inside, only to find that all your most persistent monsters are inside your own candy-colored mind.”

The real strength here though are in the places you can feel the nuance. It’s subtle, but there’s a real honesty between the breaths and the empty spaces. Powerfully disarming, it leaves you completely exposed those complex highs and lows of an almost Liz Phair “fuck it” style sadness. But not without wrapping the whole thing up in a sugar sour indie-pop tune that lands somewhere between Exile in Guyville and Whitechocolatespaceegg.

Watch the video for “Eat Cake” 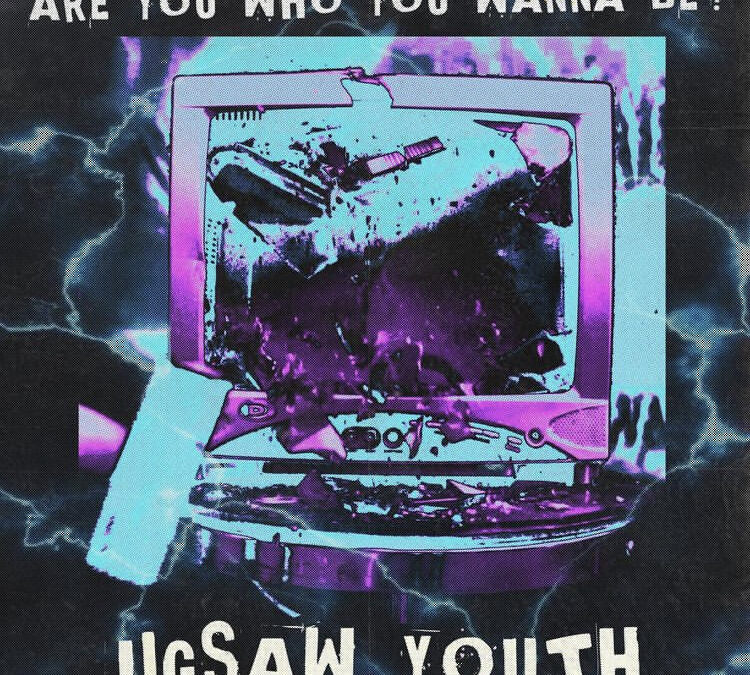 Jigsaw Youth- Are You Who You Wanna Be?

Staten Island’s favorite trio, Jigsaw Youth, have been making music and mischief together since they were teenagers. Though longtime favorites of ours, their latest release, the two song EP Are You Who You Wanna Be? makes it clear they are just now embarking on the first steps of a much larger journey together, one whose destination is determined only by how far they choose to go. It’s no surprise in the last year, they got scooped up to go on national tours and have played sold sold-out shows with the likes of Destroy Boys, Sasami, Foxy Shazam, and Wargasm. I’ve spent some time in the trenches with this fierce group over the years—we’ve shared the stage and I’ve moshed in their pits. Maria Alvarez (bass/vocals), Nastacha Beck (guitar/vocals) and Alex Dmytrow (drums) sweat and hustle their asses off for every bit of every thing they do, and it shows.

Oh, and they write killer songs. I’m a sucker for a good side A/side B, and their new single release swings the pendulum hard in both directions. “I Cud Crash & Burn” has a poised restraint that we don’t often hear from Jigsaw Youth. It’s like laying asphalt and smoothing gravel over a layer of 90s fuzz. It’s dismissively gratifying in its delivery that never quite breaks out, but instead lures you in with a satisfying melodic growl that Brody Dalle would be proud of. The titular “Are You Who You Wanna Be?” is closer to the unyielding sonic barrage we’ve come to expect from the band and in it they unleash an onslaught of slithering vocals and guitar lines—Alvarez and Beck ducking and weaving between Dmytrow’s thunderous fills and pounding stagger beat. 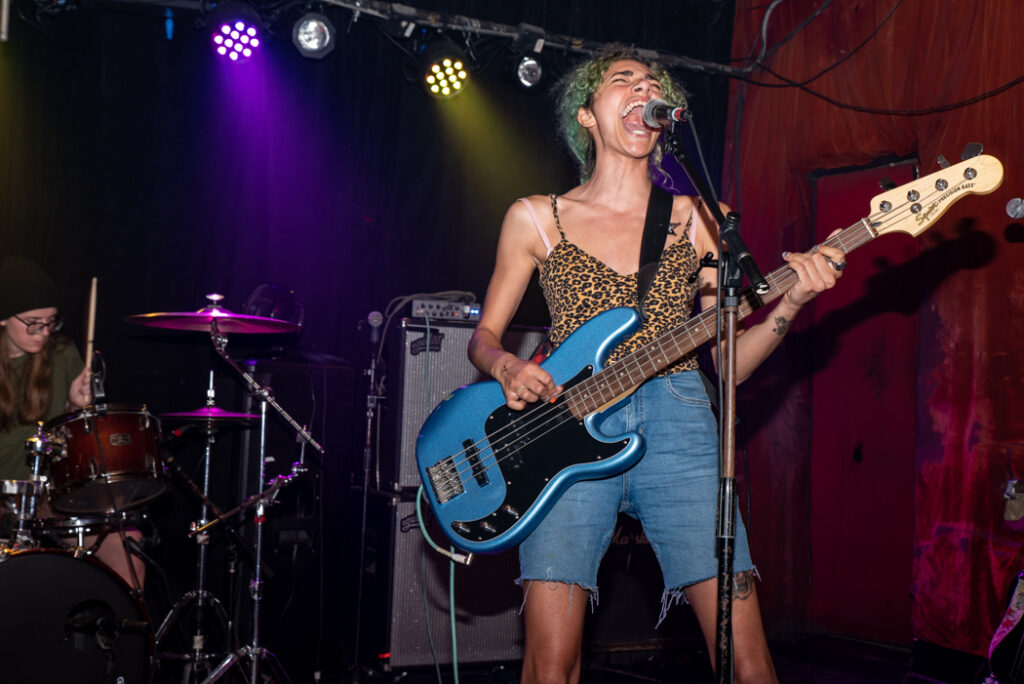 The release strikes a great balance for a band whose scales seem tipped toward fortune. And though their future may be unwritten, it’s clear these Staten Island punks are just getting warmed up and are on the precipice of some big things to come.

Are You Who You Wanna Be? is out now on all major streaming platforms. Keep up with the band on their Instagram.