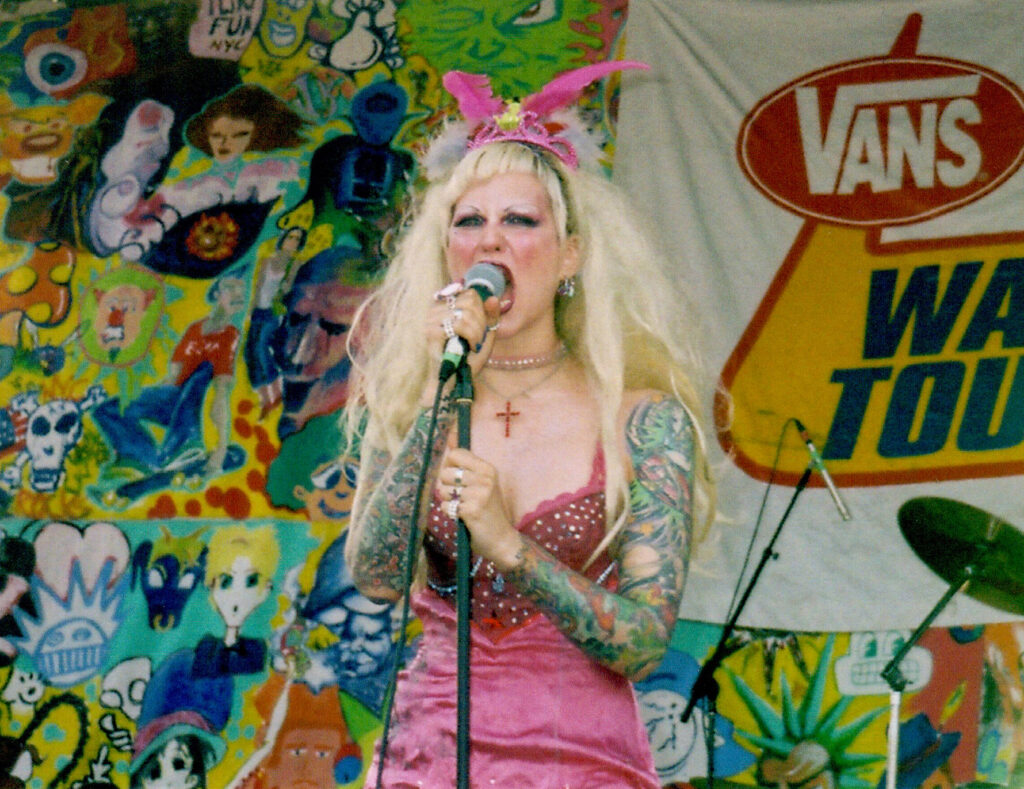 The Lunachicks recently released a book, Fallopian Rhapsody, which recounts the story of the band from its inception in the mid 1980s, through the wild times of the 90s, up to their long term hiatus beginning in the early 2000s, and their recent rebirth for the 2020s. As soon as it was announced, I placed a pre-order and immediately dove in the moment it arrived, polishing it off in a day and a half. Riotously funny, endearing, and yes even absolutely gross at times, the book tells the story of the three main members of the band- singer Theo Kogan, guitarist Gina Volpe, and bassist Sydney “Squid” Silver– meeting in their youth, forming the band as teens along with rhythm guitarist Sindi B, the shows and exploits they got up to all along the way, and how multiple drummers- Becky Wreck, Chip English, and Gus “Destroy” Morgan– moved through the band over the years. Impressively, all members who were involved in the band over the years offer insight on their time in the Lunachicks (though some significantly more than others) but the story is largely told through the eyes of Kogan, Silver, and Volpe.

The book includes chapters on each member’s childhood as well as how they came to meet one another and later start the band together. It follows through the timeline with each of the members describing- often together and in interview form- the many events that shaped the course of the band. How they broke through to play at CBGB for the first time, the irritation of working with Kim Gordon and Thurston Moore on their first album, being in Japan to record the “Sushi Ala Mode” EP (“the worst thing we ever recorded” according to Silver on the night of the book launch), misadventures on European tours, the costumes/outfits, personal struggles and personality clashes that happened throughout, and the disappointment and frustration of playing/traveling in the hyper masculine world of Warped Tour in 1999 that was the final straw leading to English’s departure and the increasingly strained band to re-consider what was next. All of these and many, many other tales craft a compelling narrative of a punk rock band on the go, moving through a world and industry that wasn’t always friendly, but that nonetheless established a strong and devoted fanbase that endures to this day.

Some of these stories I already knew from being a fan for so many years, but many I did not so it was very eye opening and often times insanely funny to think about them getting up to a lot of these hijinx on the road. I also couldn’t help but cheer for them when reading a lot of their accounts of pushing through and confronting misogyny head on, most memorably how they went ballistic on a sleazy promoter in the UK shortly after English came into the picture as a fill-in drummer for a European tour and how this incident- with them trashing the dressing room and smashing the venue’s lighting rig after catching said promoter peeping on the band changing in the dressing room via a two way mirror- cemented them as a permanent member of the band for the next several years.

In the waning pages of the book the band briefly talks about the burnout they felt at the end and the need to move on but also that they never really had a discussion about officially ending things, they just stopped booking tours and writing songs. Adjusting to life afterwards is also quickly addressed along with some of what they got up to in the intervening years. So while not as much space is devoted to the aftermath of the band ending, some of what is included- the story of Silver surviving cancer being the most heart wrenching- shows how much they truly love each other and that they were way more than just some friends who were in a band for a while together.

As for celebrating the release of the book, the pandemic put a damper on things at first so there was initially a virtual book launch that was held on June 1st, the day the book was released. As things have begun to improve since then, they were able to hold an in person event on Friday July 23rd with the three main Lunachicks on hand and joined by co-author Jeanne Fury at Powerhouse Books in Dumbo. The group answered questions and talked to a small crowd of devoted fans about the book and were delightfully engaging with everyone who wanted to talk to them during the course of the event. While I had been expecting more of a traditional book reading with anecdotes, this was the Lunachicks after all, so it instead took on a game show vibe (reminiscent of their video for “Don’t Want You”) and the band played “Lunachicks Jeopardy”- complete with the sound tech providing the classic “thinking music,” much to the amusement of both the band and the crowd. Fury quizzed the members on their adventures along the way which led to many hilarious answers and more ridiculous re-countings and further details on some of the best stories contained within the pages of the book.

The band also answered direct questions from fans, the one I think most everyone wanted to know is “what next?” They initially announced reunion shows for 2020 at Webster Hall that were pushed back several times and which are now scheduled for November 26th and 27th, 2021 (they will also appear at Punk Rock Bowling in September 2021). But what comes after that? They so far had not made mention of any future plans beyond these shows on their website or social media, but when asked if this was it or if “they would keep playing until they were the Golden Girls.” Kogan quipped “aren’t we already the Golden Girls?” before Silver elaborated on what may happen next: “So we’re just moving through a phase and who knows what other phases we might move through together? But I’m sure that it will be one phase after the other til we all drop dead, because we really like each other a lot” (this also being said in a wonderfully sassy affected voice). Volpe chimed in and added “We’ve been busy rehearsing and doing the book and doing all this stuff so it just seems weird that we would stop. The future is unwritten but I would imagine that yeah, we have lots of shit we still have to do.” Kogan followed up her bandmates to say “I mean someday we could all walk out with walkers for all we know” before saying she hoped they would one day be sponsored by Depends and Metamucil which garnered much laughter from the audience.

While the answers were a bit coy and guarded, and delivered with the special brand of Lunachicks snark, it seems clear that the band is not done yet by any means and do plan to keep things going in some form. They were also asked about if there are any plans to record new music, a question I’m sure many fans want to know. Volpe immediately answered, excitedly addressing Silver and saying “I actually was going to send you the riff last night!” alluding to songs in the works or at least beginning of foundations and ideas for new songs, with Silver adding that it’s so easy now to say “send it right over and I’ll see what I can do with it” with the use of cell phones, concluding with “so you never know.” Again not a direct confirmation and another coy answer, but definitely something to give the fans hope that more music could be coming in the future. 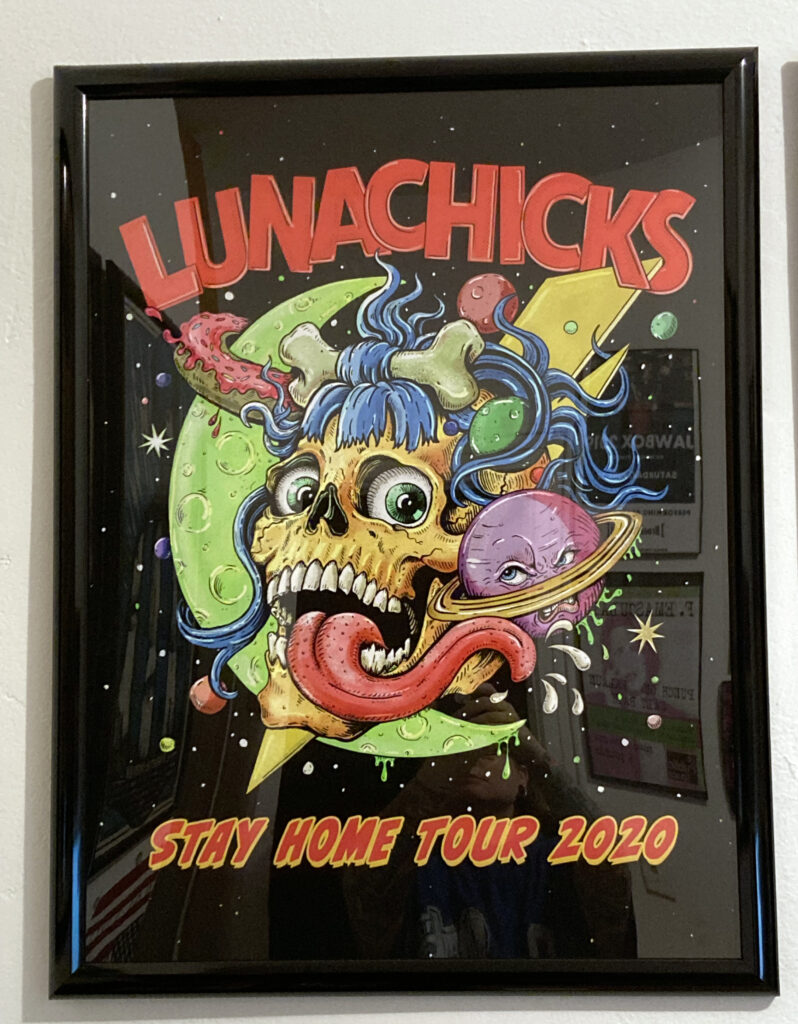 I can sit here and write for a VERY long time about the Lunachicks and tell many stories of making hand made merch and mix tapes for friends, gushing about them in my high school zine, or bashing through a crappy cover of their song “Drop Dead,” with my very first band (yes audio of that still exists, no I won’t share it here!) but suffice it to say that they were such an important band to me in my teenage into early adult years and still are today; I would not be exaggerating to use the term “life saving,” or at the very least “life affirming,” to describe their impact on me.

They came into my life at a time when I didn’t have many role models to look towards that were flying the “freak flag” without reservation; it gave me great strength to have their music to turn to at that age, particularly with just being able to be comfortable with myself at a time when most of the adults around me didn’t want me to be what I wanted to be, but rather to be in a box of what they wanted me to be- a familiar story for many weird, lonely, or queer teenagers. I was so happy to fan girl for a moment and relay that to them now, at 40 years old, just how important they were and still are to me. Theo graciously talked to me for a few moments and chuckled delightedly when I also told her that she and Squid were the very first heavily tattooed women I ever saw and I knew immediately that “I want to look like that!” Some 25 years later, I have still have some catching up to do to their work, but I’m well on my way. And more importantly than that, I’m comfortable in my own skin in a way I could have only dreamed about when I first discovered their music and I can say that in part because of them.

Reading Fallopian Rhapsody was not only a delight as a long time fan but as a musician myself. I found great joy in laughing and groaning along to the many memories and tales of the trials and tribulations of being in a band and it was nice to realize “wow everyone in a band deals with drama and bullshit too, not just me/my bands.” While there are many, many stories told in the book about the often wacky life of being in a band, it is absolutely a book about a wonderful and enduring friendship, a nearly four decade bond between women who went through their youth and early adulthood doing everything together. It is also about how those bonds were tested along the way by life on the road, drugs, relationships, stress, creative tensions and any of the other myriad issues that can and do affect working musicians. But the story also addresses how those bonds were ultimately strengthened by life changing events after the end of the band, things such as Silver’s cancer diagnosis and when she and Kogan later became mothers. In the end, those are not only the most poignant moments but the strongest part of the Lunachicks’ story.

The music video for “Don’t Want You,” a true 90s classic 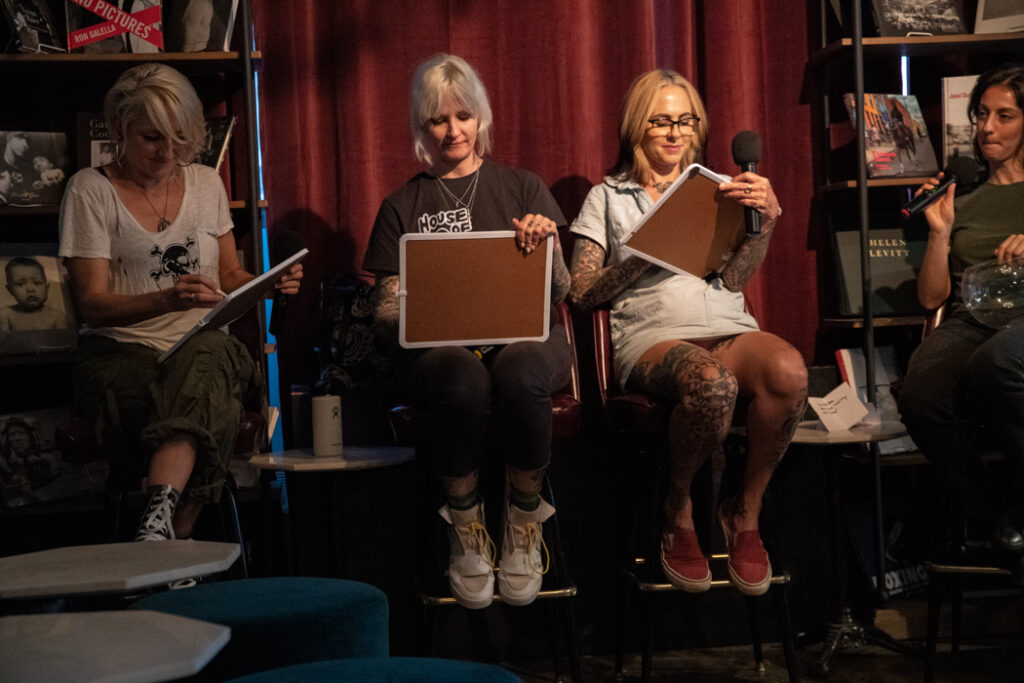 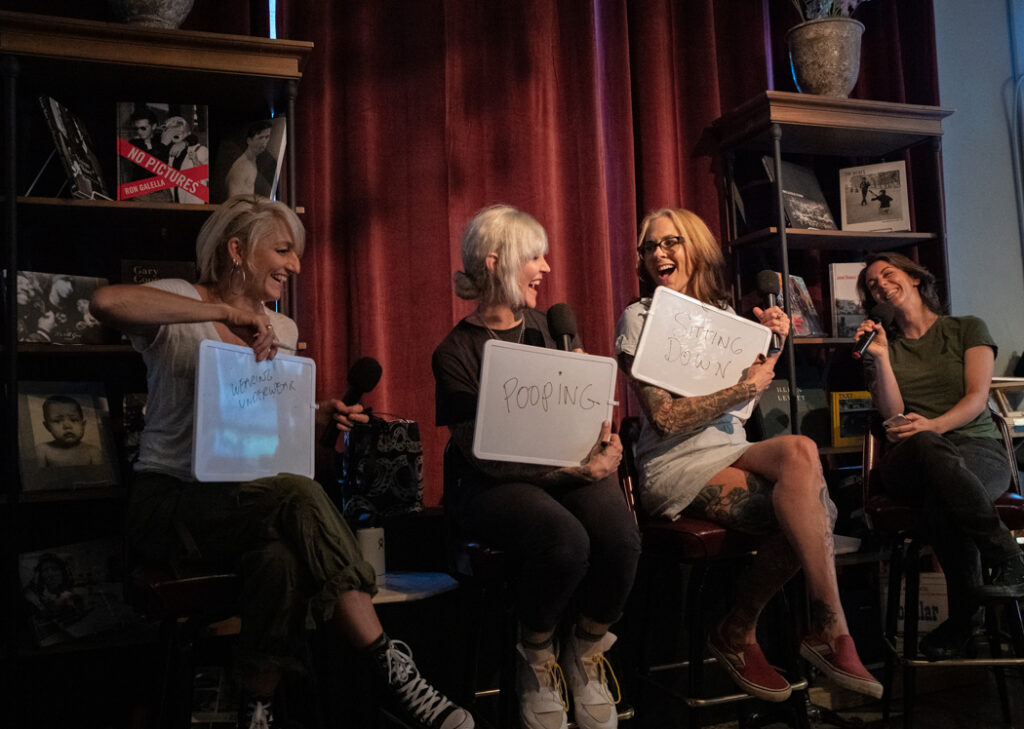 The answer when asked “Squid never ever practiced while [blank]?”

(answers included- “wearing underwear,” “pooping,” “sitting down”  You can find the correct answer in the book) 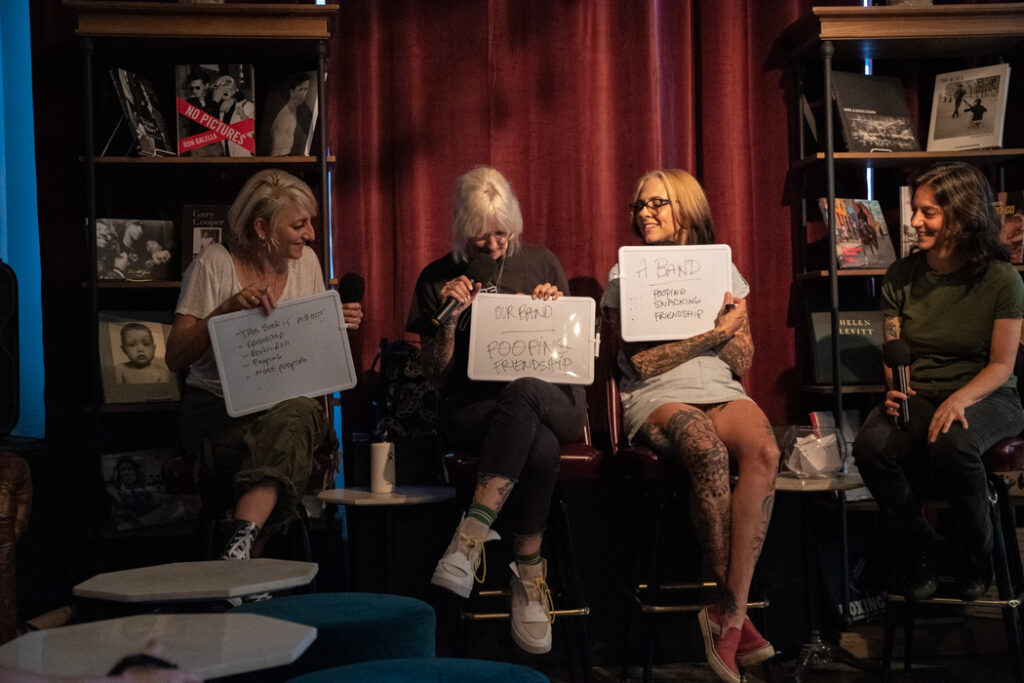 The answer when asked “what is this book about?” 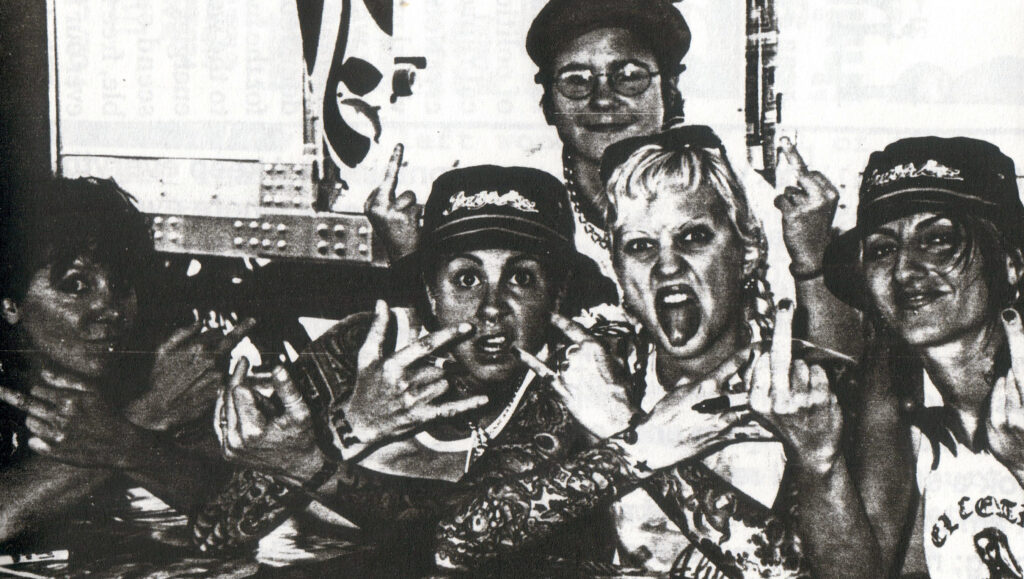 Kate Hoos and The Lunachicks, 1999 (I was 18 in this photo. I couldn’t find the original negative so scanned this from a copy of the zine I made at the time) 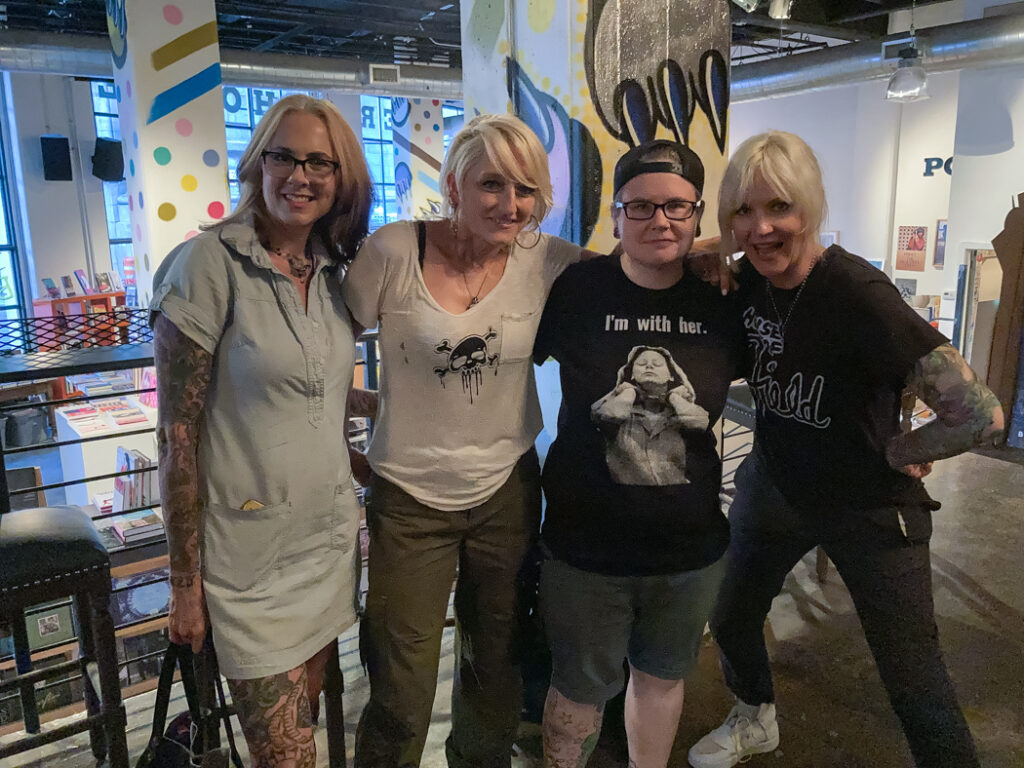 Kate Hoos and The Lunachicks, 2021 (definitely not still 18 in this photo by Ellen Qbertplaya)